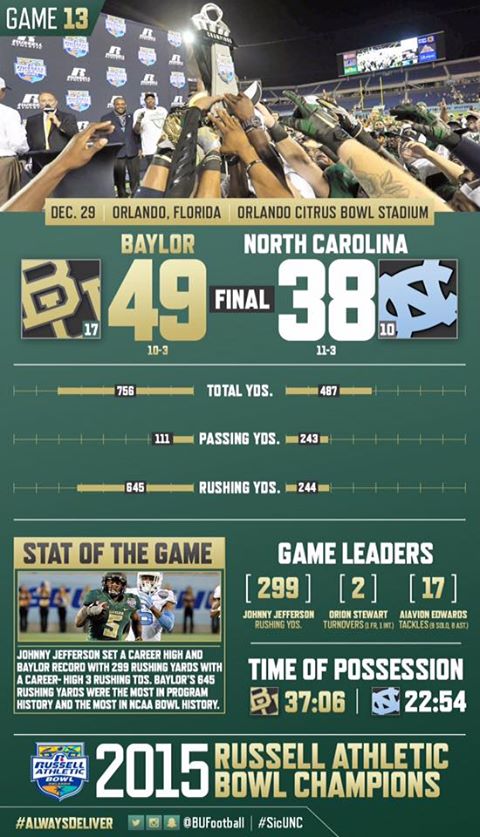 The Baylor football team has had their fair share of highs and lows throughout the 2015 season as they started 7-0 with a championship-caliber team, only to lose two QBs and end the regular season with a 9-3 record. After losing to TCU on Black Friday and then to Texas on December 5th, the Bears  had a rough season ending. With the loss of star QB Seth Russell in October and then true freshman QB Jarrett Stidham at Oklahoma State, the Baylor offense was forced to reinvent themselves under the leadership of third string Chris Johnson. Johnson performed remarkably in the second half of the Oklahoma State game and led the Bears to their first victory in Stillwater since 1939. His skills were put to the test at TCU in freezing, monsoon-like conditions and was forced to leave the Texas game in the beginning of the first quarter with a concussion. Because of the injury bug that affected every scholarship QB, star RB Shock Linwood, and RT Patrick Colbert, coach Art Briles and his staff invented a new offense- one that would lead the Bears to excel in the most exciting bowl game I’ve ever seen.

Although players and fans previously expected Baylor to play in the CFP championship or a New Years Six bowl game, the team’s luck ran out at the end of the Texas game as they lost their second consecutive game and third of the season. The #17 Bears were ultimately sent to Orlando, Florida to play in the Russell Athletic Bowl against the #10 North Carolina Tar Heels. Baylor was the underdog with no one expecting much of the bruised and battered Bear offense as they lost Biletnikoff award winner and star WR Corey Coleman to a sports hernia, their top two QBs, RB Shock Linwood with a foot injury, and RT Patrick Colbert who had surgery on his arm. With most of the Baylor starting offense on the sidelines, the bowl game seemed to unanimously favor the Tar Heels under the leadership of coach Larry Fedora and QB Marquise Williams. Although it seemed like all hope was lost for the Bears in the worst offensive situation imaginable, coach Briles and co. had many tricks up their sleeve as they prepared to unleash the “Wildbear” offense that would crush the hopes of a UNC bowl win. The Wildbear consisted of five different players receiving snaps- QB/WR Chris Johnson; WR Lynx Hawthorne; and RBs Johnny Jefferson, Devin Chafin, and Terence Williams.

The Bears started off with QB/WR Chris Johnson taking snaps under center but after a few incomplete passes, switched to a complete rushing Wildcat offense. They marched down the field and with the help of RB Johnny Jefferson, gained yardage. The Tar Heels were strong enough to stop RB Devin Chafin on fourth down and started on their own 31 yard line. After a quick score by UNC, the Bears started with Chafin under center and rushed for a first down. With Jefferson as QB, he threw a short pass to WR Ishmael Zamora, who gained 16 yards for another Baylor first down. Another first down was gained by Chafin before RS freshman RB Terence Williams started taking snaps and used his body length to gain yards. The first Baylor score was a six yard run by Hawthorne and a good kick by K Chris Callahan. The Bears defense came up quickly with multiple stops, forcing the Tar Heels to punt the ball away. Jefferson took a direct snap and rushed for 41 yards and seven more at the UNC 40. Hawthorne took the snap and with a great block by Chafin, juked past two defenders and gained 37 more yards to the UNC 3. This led to a two yard TD run by Chafin and a good kick by Callahan. With a strong defensive performance in the beginning of the second quarter, the Tar Heels were held to a field goal and a score of 14-10. When Baylor couldn’t get a first down, they punted the ball away but P/K Drew Galitz was roughed during the kick and the ball was returned to the Bears. Chafin gained more rushing yards and helped Jefferson to an 11 yard TD and a good kick. LB Aiavion Edwards was a monster all night and sent UNC QB Williams running for a loss of three yards. When Williams tried to throw a deep pass down the field, the ball was intercepted by Baylor S Orion Stewart, who returned it to the BU 33. With more Wildcat help, Jefferson ran for a 16 yard TD with two minutes left in the half. The last two minutes were filled with thrown flags, starting with a called-back targeting penalty on Baylor CB Ryan Reid who blocked a receiver with his shoulder. After a few plays, BU’s own DE Shawn Oakman’s helmet was ripped off by UNC lineman and he was called for unsportsmanlike conduct because he continued playing without his helmet on. Coach Briles and co. were infuriated with this call and were penalized for sideline interference, swaying the game’s momentum to UNC, where they scored their last TD of the first half.

The Tar Heels got the ball back for the second half and scored on the first drive. The four-headed Wildbear of Johnson, Chafin, Jefferson, and T. Williams marched the Baylor offense down the field quickly but with a bad play call, Johnson’s pass intended for TE Jordan Feuerbacher was intercepted in the end zone. UNC’s Mack Hollins was ejected from the game after blindsiding Baylor S Chance Waz and was called for targeting. The Tar Heels’ M. Williams was sacked by Baylor LB Taylor Young for a loss of yards and UNC were forced to punt the ball away. Chafin rushing for 14 and 17 yards helped T. Williams score Baylor’s 34th point plus a good Callahan kick. UNC rushed the ball for 67 yards on the first play and when their RB rushed into the end zone, an Aiavion Edwards sack forced him to fumble the ball, which was recovered by Baylor S Orion Stewart. Jefferson got a direct snap and ran 80 yards for another Baylor TD in one play. The Tar Heels quickly scored before the end of the third quarter, leaving the score at 42-31 in favor of Baylor. Johnson regained his QB position under center and connected with T. Williams and TE Gus Penning for short yard gains. With a big 15 yard run by Hawthorne, T. Williams was able to rush into the end zone for a TD in the next play. The Tar Heels cut Baylor’s lead and shortened the score to 38-49. The Bears received the ball and ran the clock out until they could finally kneel the ball with a final score of 49-38.

RB Johnny Jefferson had the game of a lifetime as he rushed for 299 yards in the game, scored three TDs, and became Baylor’s second 1,000 yard rusher in the season. Under the leadership of five different “QBs” in the form of Johnson, Jefferson, Chafin, Hawthorne, and Williams, Baylor showed its diversity and ability to control the ball on the ground as well as they can in the air. The Bears racked up 645 rushing yards and 756 yards of total offense. Aiavion Edwards was the most dominant defensive player of the field as he was credited for 17 tackles, 2 TFL, one sack, and a forced fumble. The offensive line battled their way through the trenches as they protected every QB and RB on the field (incidentally, every RB was a QB that night). This game was the best way to send off the senior class who not only reached their 40th win of their careers, but tied the 2014 class for winningest senior class. Thank you LaQuan McGowan, Corey Coleman, Shawn Oakman, Jamal Palmer, Spencer Drango, Lee Bristow, Trevor Clemens-Valdez, Beau Blackshear, Patrick Colbert, Blake Muir, Jarrell Broxton, Desmine Hilliard, Grant Campbell, Jay Lee, Terrell Burt, Jimmy Landes, and Gus Penning. Thank you for your strength, courage, heart, and passion for the game over the past 4-5 years. It’s been such an honor to watch you play. Congratulations to the Bears on becoming the Russell Athletic Bowl Champions and coach Briles on his 50th win in 5 years!