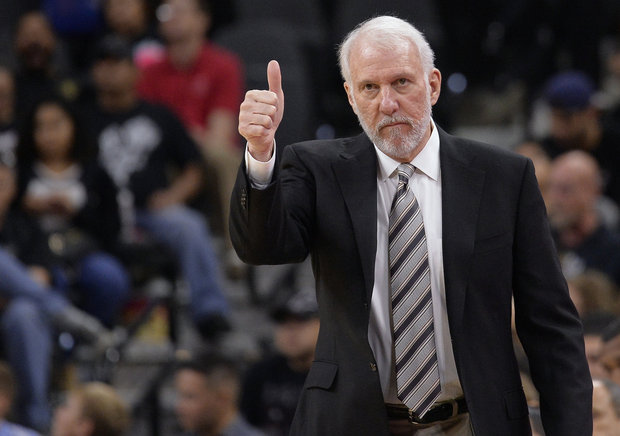 As I’ve previously mentioned in a few other sports posts, I didn’t grow up watching NBA games. However, one name I’ve always known is ‘Coach Pop’. Gregg Popovich is the head coach of the San Antonio Spurs and has been since 1996. Pop played college ball at the United States Air Force Academy before touring with the U.S. Armed Forces Basketball Team. After winning the Amateur Athletic Union championship, Pop was invited to the 1972 U.S. Olympic Basketball Team trials. He got his coaching start as an assistant with the Academy in 1973 and went on to earn head coach and assistant positions with Pomona-Pitzer and Kansas through the late 80s. From 1988-92, Pop was the lead assistant under Spurs coach Larry Brown. After a brief stint with the Golden State Warriors, Pop returned to San Antonio as the team’s general manager and Vice President of Basketball Operations. One of the most memorable moments of Pop’s career was when he fired coach Bob Hill and named himself head coach of the Spurs in 1996.

The arrival of Pop’s heroic trio- Tim Duncan, Tony Parker and Manu Ginobli- has led to an annually winning team. The Spurs are always a threatening powerhouse in the NBA’s Western Conference. Pop and his Spurs have won five championships in 1999, 2003, 2005, 2007 and 2014. He was also named the NBA Coach of the Year in 2003, 2012 and 2014. In 2016, Pop led his team to a franchise-high 67 wins. The combination of Pop and Duncan will undoubtedly go down in history as one of the greatest duos in the NBA. I’m not a Spurs fan myself, but I acknowledge that every basketball fan will always remember the coaching genius of Pop.