The character disparity between a good guy and a bad guy is prevalent in the world of sports and especially in football. There are those like Jameis Winston and Johnny Manziel who prove to the world that horrible people are rewarded despite their devious actions and then there are those like Silas Nacita who are brutally punished for making a mistake.

Silas Nacita is one of the best people I know. I’ve never met him personally but I have experienced first-hand how thoughtful, generous, and kind he is as a person and an athlete. If you don’t know who I’m talking about, Silas was an RB for Baylor and was a walk-on during the 2014 season. After family issues at home, Silas became a homeless teen who worked multiple jobs and took online classes at his local community college in order to try and achieve his goal of becoming the Baylor University football playmaker. After one year of sleeping in ditches, on friends’ couches, and in parks, earning a 4.1 as his final GPA, and receiving an academic scholarship, Silas finally reached his goal and joined the Baylor football team as a sophomore. During the season as a backup, he rushed for three touchdowns and earned first-team Academic All-Big 12 Honors. I’ve enjoyed reading his tweets and watching him interact with fans on a daily basis through social media. There aren’t many athletes (heading toward a professional career) who take the time to hang out with and really talk to the people who root them on every week. Silas set up weekly bible studies at his apartment on campus for anyone who wanted to join him, took pictures with each and every fan he encountered, spread his passion for his faith, and became an icon for the team when a fan’s phone autocorrected his name from Silas Nacita to “Salsa Nacho”.

Unfortunately, Silas was released from the Baylor football team before Spring practices began. He tweeted a lengthy note about his receiving “impermissible benefits” while he was homeless last year and stated that the NCAA ruled him ineligible. 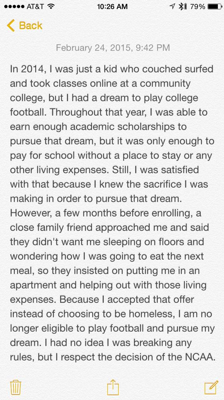 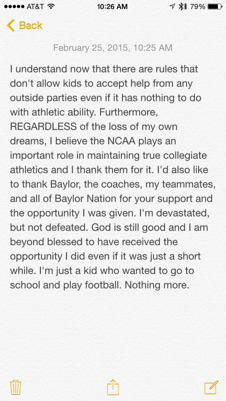 After hours of backlash from fans toward the NCAA, the association stated that they never ruled Silas ineligible, causing confusion from all sides of the argument. Ian McCaw, Baylor AD’s comment on Silas at a press conference also stirred up frustration from fans because of the lack of clarity.

“Silas Nacita will not be a part of the football program moving forward due to rules violations that impact his eligibility. We appreciate his contributions to Baylor football and wish him well as he completes his studies,” -Ian McCaw. Coach Art Briles also offered his opinion saying that the football program itself has no problem with Silas and that he and the rest of the team would be willing to welcome him back with open arms if his eligibility is renewed.

Sadly, Silas revealed in another tweet that he made a mistake by accepting the housing offer from his family friend and should have listened to the Baylor compliance office when they warned him about receiving benefits. Ultimately, his eligibility was taken away by Baylor compliance in order to protect the team from any NCAA backlash. 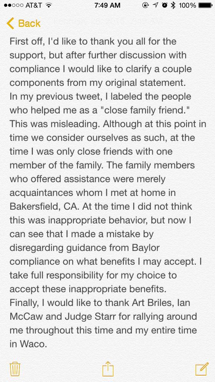 Silas made a mistake and he is currently taking full responsibility for his actions. Should he have accepted the so called “impermissible benefits?” Probably not. However, he was a struggling homeless kid trying to pave his own way into college football. Unlike the Jameis’s and the Johnny’s, Silas is truly a wonderful person. He hasn’t robbed, assaulted, raped, or violated anyone like other athletes have and yet, his dream has been taken away after years of hard work.

I feel so horrible for Silas and I truly wish him the best. I know that he is a fantastic person and athlete and that this situation will probably turn in to something good for him in the end. I’m rooting for you, Silas!