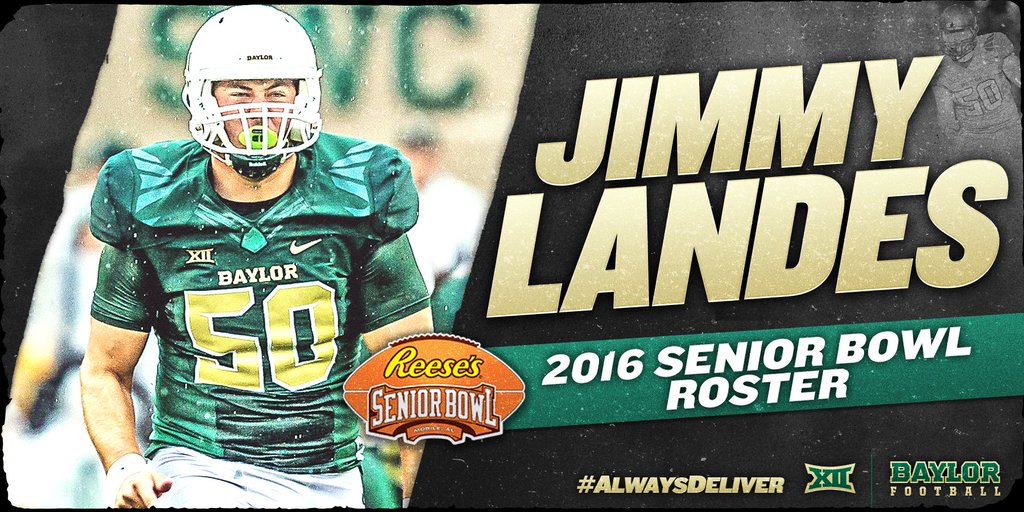 Long snappers are the football players where, if you don’t know who they are, that’s a good thing. Most fans usually learn the name of the LS if he screws up a snap or makes a mistake. In the case of Jimmy Landes, he’s not only a fan favorite, but also hasn’t made any real errors in his football career. Landes played both football and baseball at Lee High School in Tyler, TX and walked on to the Baylor football team in 2011. After Baylor’s starting LS got injured, Landes became the primary place-kicker in 11 games during his freshman year. Landes played only in 3 games during his sophomore year because he decided to focus mainly on catching for the baseball team. After switching to football full-time, Landes started in all 13 games of his junior year and made the sole fumble recovery of his football career. He was named to the 2014 All-Big 12 second team. In his 2015 senior season, Landes started in all 13 games and made his first and only tackle. He was also named to the 2015 Academic All-Big 12 second team. He unsuccessfully created a Heisman campaign, but gained national recognition when he uploaded a video of himself snapping a football from the top of McLane stadium into a bucket on the field.

Landes was invited to the 2016 Reese’s Senior Bowl as one of only two LS along with three other Baylor teammates. He played on the South team, which defeated the North with a final score of 27-16. During the Senior Bowl, Landes was invited to the NFL Scouting Combine as the lone LS. At the Scouting Combine, the 6’1″ 240 pound player recorded a 5.00 40-yard dash, 110 inch broad jump, 7.05 second three cone drill, and 4.38 second 20 yard shuttle. At Baylor’s pro day, Landes improved his 40 yard dash to 4.92 seconds.