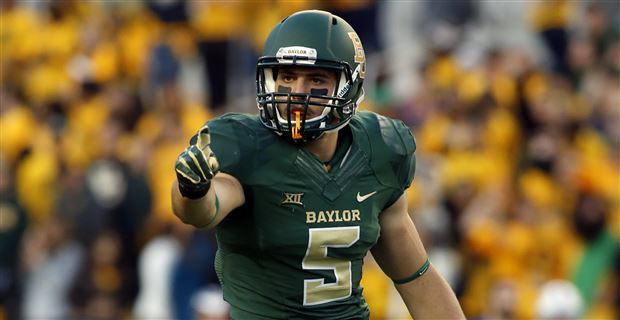 The path to the Baylor football team was a winding route for linebacker Grant Campbell. A standout two-sport starter at Garces Memorial High School in Bakersfield, CA, Cambell shined on both the field and the dugout. He played as both LB and RB on the football team and held records for his school’s baseball team. Although he made the All-State team during his senior year, Campbell received little attention from Power 5 teams and ultimately decided to play baseball for California State University Bakersfield. After realizing how much he missed football, Campbell transferred to Bakersfield College where in 2013 he recorded 108 tackles; 3.5 sacks for a loss of 17 yards; 8.5 tackles for loss; two QB hurries and one fumble recovery returned for 32 yards. Campbell’s performance at BC caught the eye of many D1 schools including Baylor and defensive coordinator Phil Bennett knew that he wanted the linebacker on his team.

In his first season at Baylor (2014), Campbell played as a reserve in all 13 games. He recorded 11 tackles; one sack for a loss of 15 yards and two QB hurries. During his senior year, Campbell thrived in his starting middle linebacker position. He earned All-Big 12 honorable mention and ranked eighth in the Big 12 with 7.5 tackles per game. Campbell totaled 97 tackles (63 solo, five for a loss of 28 yards); 2.5 sacks for a loss of 25 yards; eight QB hurries and two fumble recoveries.