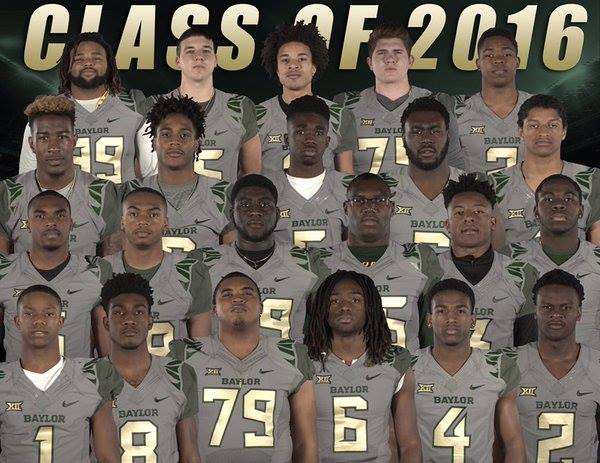 National Signing Day 2016 is officially here and it’s the most exciting day in the football offseason for fans and coaches alike. I’ve been waiting for NSD since the stress of last year slowly dissipated (I stayed up all night stressed out about which school Cordell Broadus would choose and a month later, he quit playing football!) and this Baylor class is hands down the most impressive group in the Art Briles era. With all of the linemen graduating or leaving early on both sides of the ball, Coach Briles and co. made the line a huge priority for this 2016 class. We snagged 22 recruits with four early enrollees and 18 signing LOIs today. All of the verbal commits sent in their letters by 9 am and the best class in this generation of Baylor football was signed and ready to go.

On the offensive side, we grabbed nine players including early enrollees QB Zach Smith, WR Tren’Davian Dixon, and OG Brandon Autry, who are all able to participate in Spring drills. Smith is a three star prototypical Briles QB who recorded 10,342 yards with 116 passing TDs and 8 INTs in his high school career. Dixon was a huge get for Baylor after he committed to the Bears, decommitted and chose UT, and then recommitted to Baylor in November. The four star receiver is ranked No. 123 nationally and will immediately start contributing to WRU. Landing Brandon Autry will be an essential part of rebuilding the offensive line after losing 4/5 starters to graduation. Autry is a JUCO transfer from Coffeyville CC and is a four star No. 1 ranked OG in the country. He’ll instantly compete with a solid collection of Baylor OLs to do work in the trenches. The offensive players that Baylor signed today are RB Kameron Martin; WRs Devin Duvernay, Jared Atkinson, and Denzel Mims; and OTs Patrick Hudson and JP Urquidez. Martin has been committed to Baylor from his sophomore year and was the leader of this class from the beginning. Martin’s close relationship with RBs Coach Jeff Lebby and the mutual loyalty between Baylor and the RB was key in keeping him for the past two years. Baylor only wanted one RB in the 2016 class and Coach Briles made sure that Martin knew how much they wanted him. The No. 7 ranked RB in the nation had 27 offers, but stuck with the Bears and signed this morning at 7:01 am. Devin Duvernay is one half of the Duvernay brothers in the 2016 Baylor class and is arguably the biggest get for BU. He is a four star WR and is credited as being ranked No. 4 in his position. The kid has serious speed similar to that of star Corey Coleman and held offers to basically every school in the country. Jared Atkinson and Denzel Mims are both three star WRs who boast big size and potential. At 6-3 and 6-2 respectively, the “two towers” are underrated guys who will look to WR Coach Tate Wallis for development within the next couple of years. Patrick Hudson, the No. 2 OT has been committed to Baylor for months, but struck up anxiety with talks of possibly flipping to UT. Fortunately for Baylor fans, the 6-5 325 lbs monster of a lineman has chosen to stick with the Bears and will try to grab a starting position going into the 2016 season (cue the mutual sigh of relief). Urquidez is a four star OT from Copperas Cove (from where we’ve had a bit of success) and has been extremely verbal about his commitment to the Bears. His loyalty to Coach Briles and co. is admirable and his immense size (6-5 300 lbs) is reminiscent of star LT Spencer Drango.

Coach Briles loaded the majority of the 2016 class on the Defensive side following the losses of key players (i.e. Shawn Oakman, Beau Blackshear, Jamal Palmer, Andrew Billings, Grant Campbell, Xavien Howard, etc.) due to graduation or early NFL declarations. The fourth early enrollee in the class is DT Jeremy Faulk, another JUCO transfer from Garden City CC. Faulk was the 2015 KJCCC Defensive Player of the Year and recorded 85 tackles in his year of playing. The 6-3 285 lb lineman is quick and explosive and will most likely make an immediate impact following the huge loss of DT Andrew Billings. The other 12 signees include DTs Bravvion Roy and DeQuinton Osborne; DEs Michael Johnson and Brandon Bowen; LB Deonte Williams; CBs Grayland Arnold, Donovan Duvernay, Raleigh Texada, Rajah Preciado, and Parrish Cobb; and S Chris Miller and Kenan Ivy. Bravvion Roy is a four star DT from Spring and is listed as No. 34 in his position. The addition of Roy is important in the 2016 class because his size will allow him to compete for a starting position with upperclassmen Byron Bonds and Andrew Morris. I spoke about DeQuinton Osborne in a recent post after the Baylor coaches snagged his commitment on the final weekend before NSD. The NJCAA First-Team All-American racked up a total of 127 tackles, 30 tackles for loss, 15 sacks, two interceptions, and one forced fumble in his time at Kilgore. Osborne will join fellow JC transfer Jeremy Faulk in replacing star DTs Beau Blackshear and Andrew Billings in the 2016 season. Michael Johnson is a three star DE who is listed as 6-2 245 lbs, allowing him to be quick and punishing on the field. Holding 16 offers from top schools in the nation, Johnson was an exciting grab for the Baylor coaches. DE Brandon Bowen was a huge surprise in the 2016 class and will make an immediate impact with the loss of Oakman and Palmer in the upcoming season. Bowen is a four star player and is credited as the No. 27 DE in the nation. Following closely behind Devin Duvernay and Tren’Davian Dixon, Bowen is the third highest ranked commit in Baylor’s 2016 class. Deontae Williams is the sole LB of this group and is a three star player who chose the Bears over the likes of Oklahoma, TCU, and Texas Tech. Look to Williams in the next year or two for playing time alongside LBs Aiavion Edwards and Taylor Young. The Bears loaded up the backfield with seven secondary players following the early loss of CB Xavien Howard and players who have one to two seasons left. Grayland Arnold is a three star CB who held offers from schools all over the nation. He’s a smaller guy listed as 5-10 and 170 lbs but with training and workouts with Coach Kaz Kazadi, he should be ready to play in a couple of years. Donovan Duvernay is the second half of the Duvernay twins and is a three star CB who chose Baylor over TCU and Michigan. Donovan’s speed can be used on both sides of the ball at WR (with brother Devin) and CB and is a really agile guy. Raleigh Texada showed his speed and skills on the high school field as a special teams returner and CB, finishing his senior season with 40 tackles, two INTs, and six pass deflections. Following in the footsteps of older brother Ranthony II (CB for TCU), Raleigh will look to make a name for himself on the collegiate level. Rajah Preciado is another CB for the Bears, who committed to the team just minutes after being offered. The three star athlete recorded 113 tackles, eight pass breakups, and two INTs in his final high school season. Parrish Cobb was a mystery recruit to Baylor fans a couple of weeks before NSD. The former OU commit was dedicated to the school for seven months before unofficially visiting Baylor and flipping to the Bears the night before signing day. Cobb is a four star CB from La Vega HS and helped his team earn a perfect 16-0 record and their first state championship at the 4A level. The addition of Cobb was a huge get for Baylor and he will probably compete to replace the loss of CB Xavien Howard. Chris Miller is a three star safety out of Frisco and is a highly underrated commit. The S held offers from Mississippi St, Wisconsin, Nebraska, etc and really impressed at the Nike Football Training Camp in Dallas. Kenan Ivy is the final DB in the 2016 class and is credited as a three star S with offers from the likes of Missouri and Wisconsin. Ivy allegedly runs a 4.45 40, which makes him a perfect get for Coach Chris Dishman to work with.

Congratulations to all 22 of the Baylor commits in the 2016 class and to Coach Briles and co. who probably worked their butts off to keep all of their guys. Now that the letters are in and the night is coming to a close, let’s finally get some rest. And for those of you who actually read all 1,500 words of this post, reward yourself for your dedication to This Is Noelle and football!