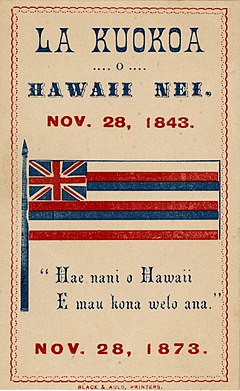 Hauʻoli lā kuʻokoʻa! Today we celebrate the 175th anniversary of Lā Kuʻokoʻa or Hawaiʻi’s Independence Day. On November 28, 1843, Hawaiʻi’s first diplomat Aliʻi Timoteo Kamalehua Haʻalilio successfully obtained the signatures of French and British authorities recognizing Hawaiʻi as an independent and sovereign kingdom. Aliʻi Haʻalilio along with his secretary William Richards, traversed by both foot and donkey from Mexico to Washington D.C. where they met former President John Tyler, who complied with the treaty’s intent. The two men traveled on to Paris, Belgium, and London, receiving signatures of accord from French and British diplomats agreeing to the treaty proposal before returning to D.C. for Tyler’s confirmed support. Before sailing back to Hawaiʻi, Aliʻi Haʻalilio passed away on December 3, 1844. In the same year, Kamehameha III, Keaweaweʻula Kīwalaʻō Kauikeaouli Kaleiopapa Kalani Waiakua Kalanikau Iokikilo Kīwalaʻō i ke kapu Kamehameha cemented Lā Kuʻokoʻa as a national holiday. Unfortunately only 50 years later on January 17, 1893, the kingdom of Hawaiʻi was illegally overthrown by the United States to the despair of Kanaka Maoli. In 1895, the illegitimate “Republic of Hawaiʻi” announced that Lā Kuʻokoʻa would no longer be celebrated and would instead be replaced by American “Thanksgiving”. However, despite America’s pillage and current illegal occupation of Hawaiʻi, we as Kanaka Maoli still follow in the steps of our kūpuna, including Aliʻi Haʻalilio and Ke Aliʻi Kauikeaouli, never forgetting what was done to us, but moving forward in their honor.