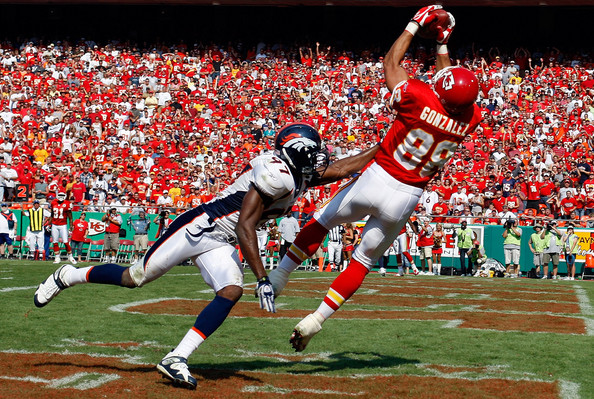 In this next installment of “Football Focus”, I’m explaining the tight end- a versatile offensive position. The tight end can not only be an eligible receiver but also a blocker against the defense during a running or passing play. TEs are also known as the ‘Y receiver’ along with two other wide receivers known as X and Z. His two main roles are to block defenders for the running back or quarterback holding the ball and/or to catch passes down the field if a receiver isn’t open. He is usually heavier and larger than normal wide receivers, which makes him a strong addition to the offensive line. TEs must be fast, strong, quick thinkers and light on their feet. Because their jobs require such versatility, these players often make some of the most money in the NFL.

One of the most famous NFL tight ends is former Kansas City Chiefs’ and Atlanta Falcons’ Tony Gonzalez. Gonzalez played both football and basketball for the University of California, Berkeley and set many records for his college. He was a first-team All-American and All-Pac-10 during his junior year. In his record setting season, he had 44 receptions for 699 yards and five touchdowns. Throughout his college career, he had 89 catches for 1,302 yards and eight touchdowns. As a basketball player for the Bears, he started 16 times and played in 82 games, supplying 6.4 points per game and 4.3 rebounds per game. He was the 13th pick in the 1997 NFL Draft by the Kansas City Chiefs and ended up playing 17 seasons with both the Chiefs and the Falcons. During his NFL tenure, Gonzalez recorded 1,325 catches for 15,127 yards and 111 touchdowns before retiring. Gonzalez was a 10-time All-Pro, a member of the NFL 2000’s All-Decade team and a 14-time Pro Bowl choice.