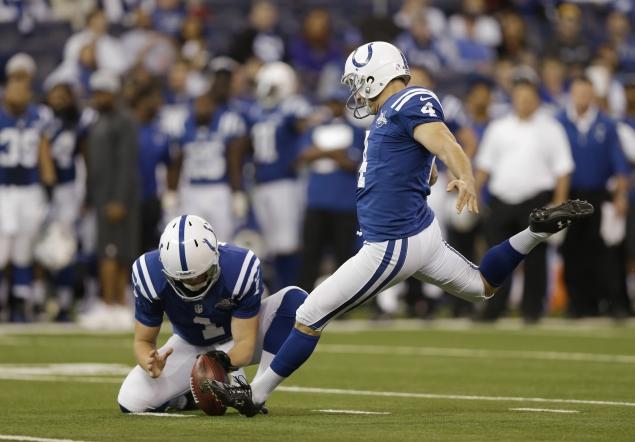 One of the most important yet most forgotten parts of the football team is the special teams. Special teams is comprised of multiple players with different responsibilities. There are place-kickers, field goal kickers, punters, holders, long snappers, punt returners, kick returners, along with units of players who kickoffs, punts, punt returns, field goal and PATs, and those who block field goal and PATs. Kind of a lot to remember, huh? Let’s start off with the specialists aka the place-kickers, field goal kickers and punters. Some football teams require their kickers to perform each position accurately, while others focus on one man for each responsibility. Place-kickers are responsible for PATs, field goal attempts and kickoffs. At kickoff, the kicker boots the ball in the air while he and 10 other players run toward the kick returner and his teammates. The kicker and his teammates are subject to stop the returner from gaining yardage. An optimal kickoff stays in the air for at least four seconds, which allows the kickoff team to get as close to the returner as possible and stop him from running with the ball.

Field goals are another way to gain points when a team is unable to score a touchdown. Most kickers are successful at completing a field goal attempt within 30 yards of the end zone. A field goal is worth three points and are most exciting when a team is trying to convert at the last second of a game. When attempting a field goal, a long snapper with snap the ball to the holder who will angle the ball in a proper position for the kicker to be as successful as possible. Here’s Baylor P/K Chris Callahan’s winning field goal kick against TCU in 2014:

Extra point attempts or “PATs” are attempted after a team has scored a touchdown. The kicker’s job is to kick the ball between the upright goal posts after it is placed at around the 2 or 3 yard line. Punts are a similar ball game (pun intended!) to kickoffs as the punter punts the ball away to the opposing team. Punts occur when a team’s offense can’t score a touchdown and is too far away from the end zone for a field goal. When they are unable to convert on third down and they’re on their own side of the field, a coach will usually decide to punt the ball away. When a punter is getting ready to boot the ball away, he must prepare himself to use extreme force and strength to get it as far to the other side of the field as possible. The punt returner will then catch the ball and try to gain yards with it.

The rest of the special teams is made up of blockers who try to block field goals and PATs. They spy on the kicker and attempt to knock the ball down once it’s in the air and obtain it for their own gain. Blockers also pursue returners and stop them from running through the field. Similar to how a defense stops the offense from scoring, special teams blockers keep the opposing players from scoring extra points and gaining yards.

Adam Vinatieri is a tried-and-true placekicker veteran in the NFL. Vinatieri played for South Dakota State University before the New England Patriots (gross) drafted him in 1999. He’s played for both the Patriots and the Indianapolis Colts, where he currently resides in his 21st season of professional football. He remains one of the best kickers in the league even though he’s 43 years old. In 21 years of the NFL, Vinatieri has made 507 of 602 field goal attempts.