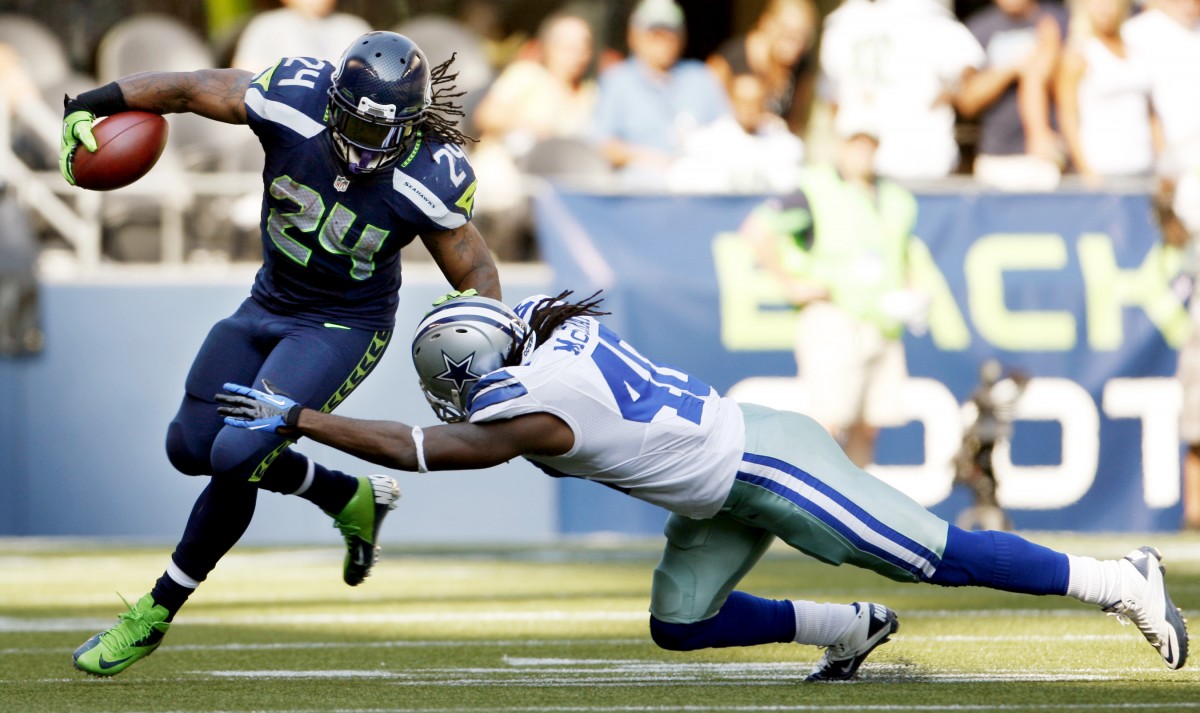 In my next “Football Focus” post I’m concentrating on running backs, which are also known as tailbacks or halfbacks. Running backs lead their teams in carries and are often some of the most physically tough players on the team. When quarterbacks are targeted for taking the initial snap, they usually have enough time to get rid of the ball by handing it to a back or throwing it to a receiver. Similar to the QB, when a RB has the ball, he is the target of every defensive player’s aggression. RBs tend to be smaller in stature, but extremely muscular. Receivers are often on the taller side because they must have the height to leap and catch the ball if necessary and running backs are on average, shorter and muscular. Because of this prototypical body type, running backs can easily slip past defenders and use their lower center of gravity to pull themselves forward. They often tend to be slower than receivers, but are fast enough to get through the pocket and to their destination (which is usually a first down).

A RB’s best friend is known as a fullback. Fullbacks are the personal defenders of the RBs. When an offense employs a RB in the backfield, there is often a larger offensive player standing next to him. For example, when a QB hands the ball to the RB, the fullback gets in front of him and blocks any defenders.

A RB has many jobs while he’s on the field. The first job is to receive the handoff. This means that when a QB doesn’t throw the ball or run with it, he gives it to his back next to him. When the RB has the ball, he must block defenders, run at top speed, and hold onto the ball with his life. RBs are often given the ball on short runs such as 4-6 yards, or on the first down of a play. His second job is to fake the grab. Sometimes a QB makes it look like he’s going to give the ball to the RB but instead keeps it and rushes. When most defensive players see a RB jog onto the field, they immediately think that it’s a rushing play. This allows the QB to “bootleg” the play and run for himself. After the QB fakes the handoff, the RB must make it look like he actually has the ball and run as if the ball were in his hands. The third job the RB has is to block defenders. The prototypical shorter RB size makes them great blockers as their lower center of gravity allows them to push past players twice their size. In special cases, the RB is used as a QB in a “Wildcat” offense. A Wildcat play simply means that the RB receives the snap instead of the QB and runs with the ball. At the end of the 2015 season, the Baylor football team was forced to employ the Wildcat formation after their three QBs were injured. Here’s a video of RB Johnny Jefferson taking snaps in the Russell Athletic Bowl.

Former Seattle Seahawks RB Marshawn Lynch was an incredible back. Nicknamed “Beast Mode”, Lynch used his 5-11 215 pound frame to his advantage. A tailback for the California Bears, Lynch started in his first three seasons and showed promise in his field (no pun intended). He totaled 490 carries for 3,230 yards and 29 TDs in his time with the Bears before leaving for the draft. He finished his college career as second all-time rushing in Cal history and holds the school record of 17 100-yard rushing games and 35 TDs in 35 games. He was the 12th overall pick by the Buffalo Bills in 2007 and was traded to the Seahawks in 2010. Although Seattle fans weren’t too impressed by him initially, he stole the hearts of the football fans on January 8th, 2011. In the NFC Wild Card game, the Seahawks were facing defending champions the New Orleans Saints. In what seemed to be an easy win for the Saints, Seattle showed potential to defeat the national champions. Marshawn Lynch took the handoff on second and ten in the fourth quarter, blocked every defender and ran for a 67 yard TD that literally created an earthquake. After five years in Seattle, Lynch announced his retirement during Super Bowl 50. He will finish tied for 24th in rushing TDs and the 36th leading rusher in NFL history.