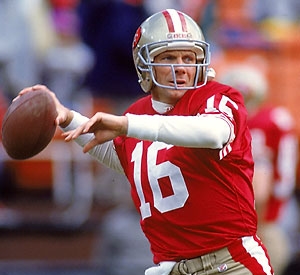 After brainstorming ways to incorporate football posts in This Is Noelle during the offseason, I decided to write a series about the basics of the game from position information to star players, penalties to historic games. Think of this series as a sort of mini “football tool kit” housing key information that isn’t usually compiled in online blogs or websites. The first post in this collection is about arguably the most important player on the team- the QB.

Quarterbacks have historically made waves in the sport, boasting enormous arm strength and a passing capacity that could put baseball pitchers to shame. The QB is an interesting player to cover. His job is to usher his offense towards the end zone through passing and rushing (he either keeps the ball or hands it off to a running back) to hopefully score a touchdown. The best QBs are strong leaders who focus on teamwork and are accurate, poised, intelligent, and competitive. Although the Offensive Coordinator or other coach calls the plays, the QB has to have the intelligence to know when to adjust under pressure. If a passing route is called but none of the receivers are open, the QB has to adapt the play, which often means that he must keep the ball and run. He lines up behind the Center who snaps him the ball and either drops back to attempt a pass, keeps the ball, or hands it off to his running back. When he drops back, he is located in the “pocket” protected by the Offensive linemen. This “safe space” gives the QB time to read his offense and pass the ball when ready. If the line is strong, the QB will have many seconds to throw the football, but if the line is weak, he is at a high risk of getting sacked or tackled.

When the offense is lining up, the QB must read the free safety to determine what kind of defense he is up against. There are many different types of coverage, but the four basic ones are Cover one, Cover two, Cover three, and Cover four. Each type of coverage allows the QB to determine whether he must enforce a running play or decide which receiver will be open in the next play. In the huddle, he will inform the offensive players of the play that the OC or other coach has called. This dynamic announcement is composed of assignments for the receivers, running backs, and offensive linemen. The plays are all named after exact actions, which the players must take during the play.

There are many historically successful Quarterbacks but the main one I grew up knowing is Joe Montana. My mom is the biggest Joe Montana fan and although my dad loved the Rams and my sister the Colts, Joe is the player I’ve grown up with. He played college football at Notre Dame and went from seventh string QB to leading the Fighting Irish to a national championship in 1977. He was picked to play for the San Francisco 49ers (my mom’s favorite team) in the third round and easily became a star. The play that he was known for in the beginning of his career was at the end of the 1981 NFC Championship game where he threw a pass to a jumping Dwight Clark in the end zone, which won the game. After the 49ers beat the Cincinnati Bengals in Super Bowl XVI with a final score of 26-21, Joe was named the game’s MVP. The combination of Montana and WR Jerry Rice led the team to seven NFC West titles in the 80s and they won Super Bowls XIX, XXIII, and XXIV. He was named the Associated Press MVP twice, earned eight Pro Bowl selections, and won four Super Bowls. Montana was inducted into the Pro Football Hall of Fame in 2000 and will always be known for his intelligence and poise on and off the field.