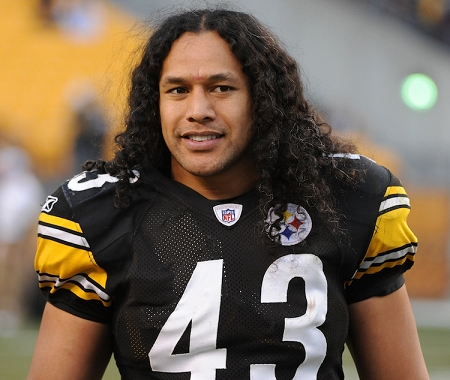 Defensive backs, also known as the ‘secondary’, are the fastest and most agile members of the defense. They are usually four to five players assigned with deep run support and pass coverage. After the quarterback threatens the defense with a deep pass, the cornerbacks, safeties and nickel backs are forced to defend the receivers. The secondary lines up behind the line of scrimmage where linebackers and defensive linemen are located. In general, the secondary is made up of two safeties (strong and free), two cornerbacks and a nickel back. Strong safeties often line up on whichever side the tight end or strong linebacker are positioned. They are assigned to stop the run or force it inside and/or drop back into pass coverage. They are extremely physical players who can keep up with quick receivers and is an able tackler. Free safeties are the deepest defenders and are the last option to stop the pass or run from scoring a touchdown. Cornerbacks focus mainly on pass coverage and their assignments vary depending on defensive playcalling. They closely line up with the receivers and try to disrupt the passes from being caught. Corners must have quick footwork, speed and agility in order to keep up with fast receivers. Nickel backs add coverage for both the pass and run game downfield and near the line of scrimmage, respectively. They can add to the set of linebackers on the field when needed. Nickels must be great tacklers and have all the skill sets of cornerbacks.

Troy Polamalu is one of the greatest Polynesian football players in NFL history. The strong safety played also as an elite linebacker with the Pittsburg Steelers for 12 seasons. He shined at the University of Southern California with 278 tackles, six interceptions, 13 pass deflections and four blocked punts. He was drafted 16th overall by the Steelers in 2003 where he became a team and fan favorite for not only his inspiring performance on the field but also his long locks of hair. He was a four-time first-team All Pro, eight-time Pro Bowler and Super Bowl XL and XLIII champion who recorded 770 tackles, 12 sacks, 32 interceptions and 14 forced fumbles.