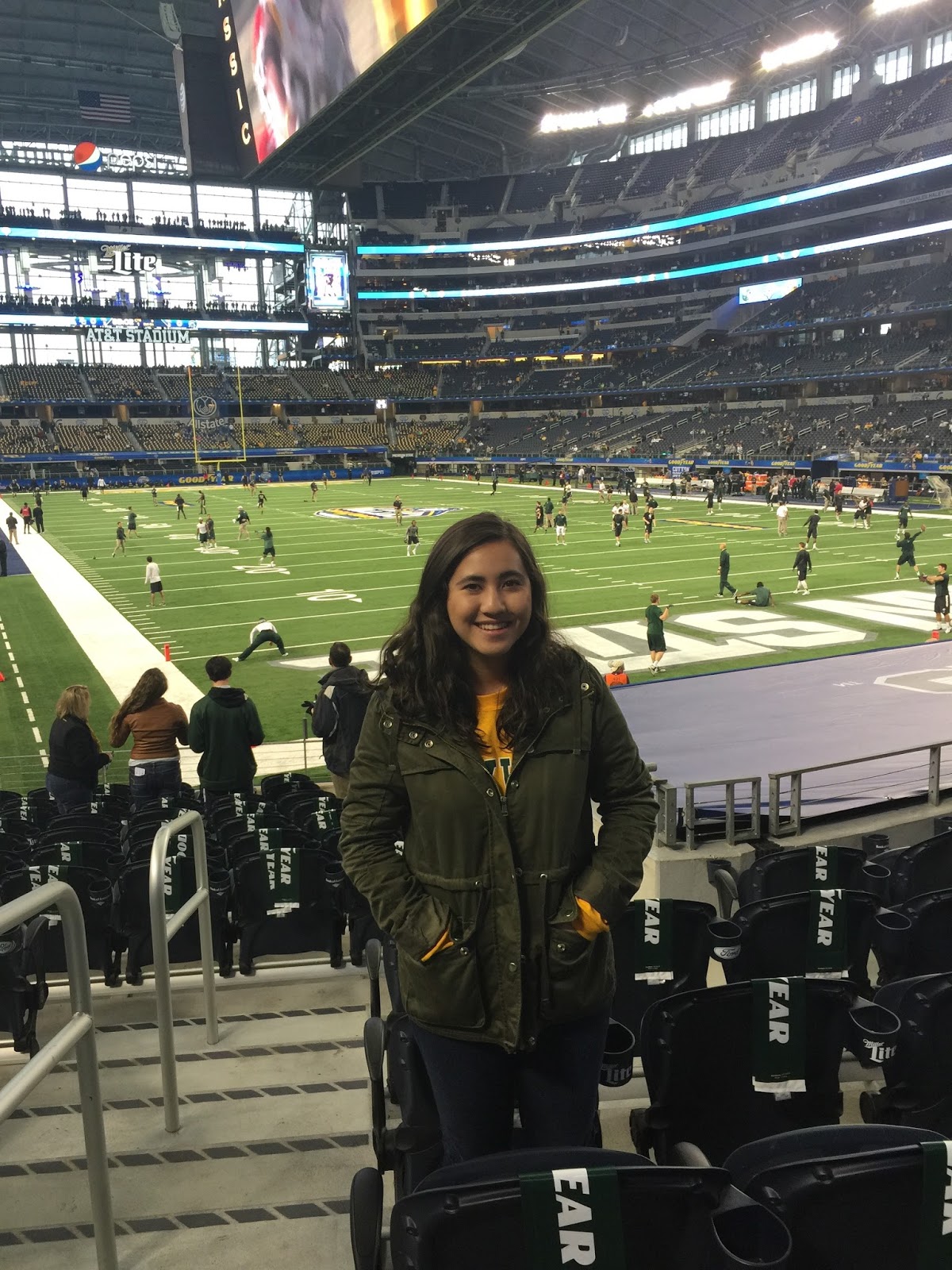 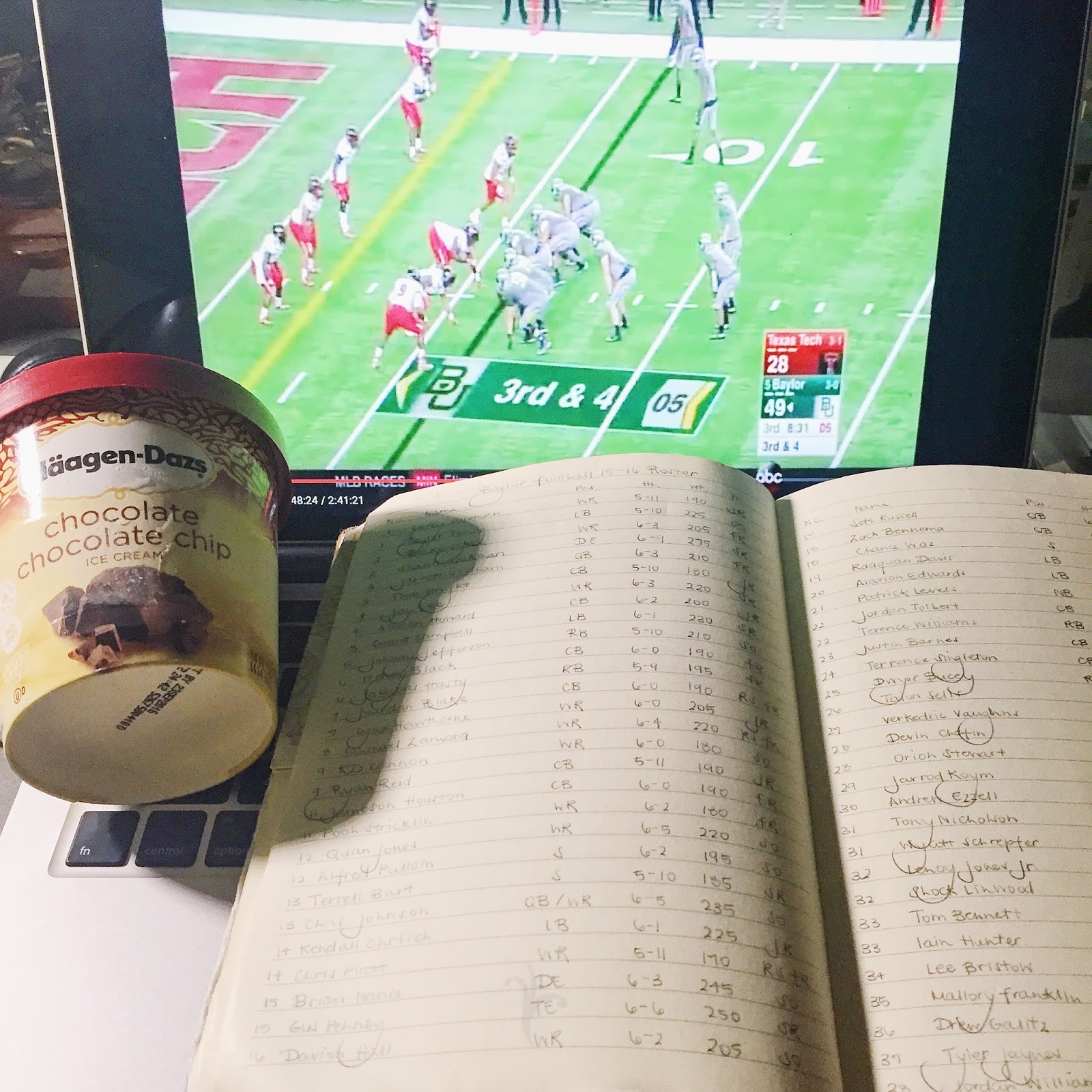 I grew up in a family of football fans. My mom loved the San Francisco 49ers, my dad the Saint Louis Rams, and my sister the Indianapolis Colts and the Denver Broncos (she would follow any team that Peyton Manning plays for). Monday night football and the Super Bowl were always a hit in my household, but I never enjoyed watching the game. My family tried to find me an NFL team to follow but my interests lay elsewhere. It wasn’t until I took my first trip to Baylor in 2012 and went to a football game that I knew I had been missing out. My first college football experience was at Floyd Casey Stadium during homecoming when the game was constantly delayed because of lightning and hail threats. Because Floyd Casey was an open outdoor stadium, all of the fans were forced to take shelter under the building and wait until the weather cleared up. This process took three to four hours and most, if not all, of the football fans cleared the premises. My dad and his friends who went to Baylor wanted to stay and watch the game even though we had no outerwear so we made ponchos out of extra garbage bags. Taking in the atmosphere during a monsoon was incredible. I loved the spirit of the true fans that stayed to finish the game, and I fell in love with football instantly. It took me a year or two after that historic Baylor trip to truly learn all that I could about the basics of the game. I realized that the NFL isn’t for me, but college football is. CFB is explosive and exciting every week as one loss could wreck a team’s bowl game/conference championship/CFP playoff chances. Unlike the NFL, it’s similar to a life-or-death situation situation as college teams put everything on the line each week.

Baylor football has become my passion and an essential part of my everyday life. Although the season takes place in the fall, my research into the players, recruits, team statistics, and coaching plays is year-long. I love hearing the stories of the players who each come from different backgrounds to become Bears. There’s QB Seth Russell who had to beg college coaches to look at him in high school; DE Shawn Oakman who turned his life around from a rough childhood and a mistake at Penn State to becoming a college football and internet sensation; LB Taylor Young who held zero offers from universities and went on to earn the Cotton Bowl defensive MVP title; WR Corey Coleman who fought his way out of the Highland Hills projects in Dallas with a single mother to become the star of the team; DE Jamal Palmer who, with the help of his grandmother, forgave the man who murdered his mother and has used his story to inspire and support pee wee football players; and the list goes on. These stories aren’t rare on the Baylor football team. The players are success stories who have played in bowl games, won back-to-back Big 12 championships, and will one day win the College Football Championship. Of course, the Baylor coaches have the most influence on the team and they too have had their fair share of struggles. Head Coach Art Briles lost his mom, dad, and aunt in a head-on collision as they drove to Houston to watch him play college ball; Assistant Athletic Director for Athletic Performance Kaz Kazadi went from a refugee in war-torn Zaire to a player for the Saint Louis Rams; and Defensive Coordinator Phil Bennett’s wife died when she was struck by lightning during an evening run. The players and coaches have used their trials to become extraordinary players/coaches and even better men.

My love of football didn’t start when I was a child. I haven’t sported an NFL jersey to school or watched my team play on the weekends. However, I’ve discovered a passion for one team that will never go away. The Baylor Bears have taught me so much about dedication and spirit for the game I adore. Although I’ve never played football, my adoration for the sport burns in my soul. It’s not just a game to me. It wasn’t just a game when we lost to Michigan State at the Cotton Bowl or when we lost to Oklahoma at home on Saturday night. Some fans argue that our coaches and players don’t have the drive to get the job done. Some call for the head of Coach Bennett when our defense struggles. Some say that we’ll never become CFP champions. Some simply turn their backs on the team when we fall. It’s my love for the game and the Bears that forced my tears at the Cotton Bowl and at McLane through both losses as I watched the boys I care about so deeply walk off the field with their heads dropped. It’s my love that makes me tightly clasp my hands together and hold my breath when I see one of my Bears go down with an injury. It’s the same love that pushes me to study former games, play calling, player names/numbers/stats, penalty calls, and opposing team information, and record them all in my notebook. It’s the love that would lead me to do anything I could for the team and it’s that love that has inspired me to want to be the first female Baylor football coach. Some people say that my passion for the team and the sport is dramatic or too over the top, that I don’t know anything about the game because I’m a girl, or that my dream of coaching is impossible because I’ve never played the sport on a team. These opinions only push me forward to accomplishing my goals as an underdog similar to the Bears. People said that Baylor would never be a great football team and they responded by winning bowl games and the Big 12 competition. I will follow in the footsteps of these unlikely heroes by coaching one day. Now let’s get started.