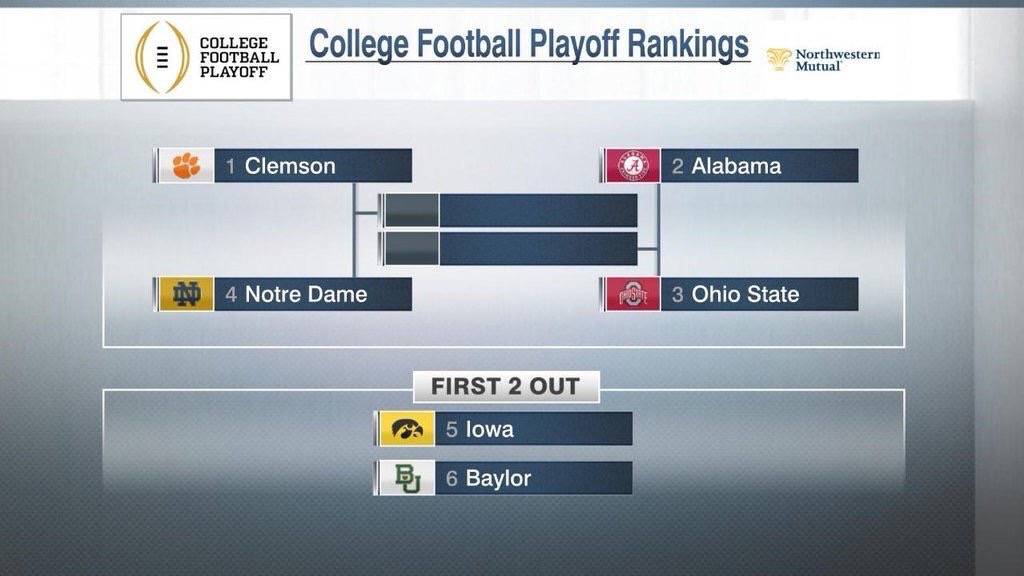 The second list of rankings for the College Football Playoff was released tonight and they are arguably more controversial than the previous set. Clemson is currently set at #1 and for good reason. The Tigers are undefeated in the ACC and should win out the rest of their schedule against Syracuse, Wake Forest, and South Carolina. As long as Clemson wins out, they should remain the first spot in the playoff. The Alabama Crimson Tide is ranked #2 as they hopped up two spots from #4 after defeating LSU at home. Despite their one-loss against a weak Ole Miss team, the committee has still kept them in the top four. Weighing in at #3 is Ohio State who continues to survive their games every weak and remain undefeated. The Buckeyes still have to face Illinois, #13 Michigan State, and #14 Michigan, which could still bring an upset to the reigning CFP Champions. Notre Dame is the most shocking of the top four, earning the last spot in the playoff contention. With a loss against #1 Clemson, the Fight Irish have the “best loss” of any top 25 team. The committee has shown that they value a strong loss over an undefeated team as proven by their ranking of Baylor at sixth. Even the Iowa Hawkeyes jumped over the Bears after their 35-27 win over Indiana.

Baylor doesn’t need to listen to the opinions of the committee but rather maintain their focus on destroying Oklahoma at home on Saturday, Oklahoma State at Stillwater, TCU at Fort Worth, and then Texas at home. With an undefeated season, the Bears are a shoe-in for a spot in the top four.