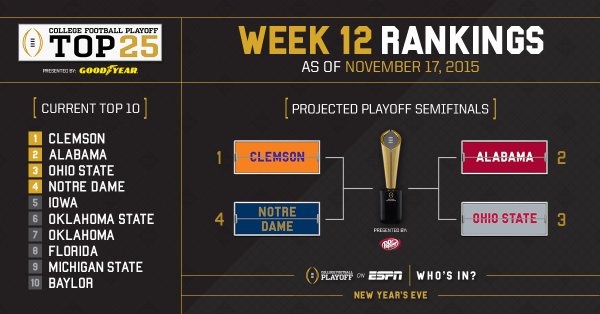 The third installment of the CFP Playoff rankings was released last night and the top five teams, unsurprisingly, stayed the same. Clemson and Ohio State remain undefeated while #2 Alabama and #4 Notre Dame both sit at 9-1. As another slap in the face to the Big 12, undefeated Oklahoma State, who has completely dominated every team so far hasn’t been able to break into the top four. Similarly, after Oklahoma destroyed #6 Baylor’s undefeated season, they haven’t made it into the playoff discussion either. The CFP rankings finish off with Florida at #8, Michigan State at #9, and Baylor at #10. The biggest surprise of the week three rankings was to see Baylor remaining in the top 10. Knowing the committee’s bias against the Big 12 and Baylor specifically, it was shocking to see that they kept the Bears in the top 10. CFP committee chair Jeff Long noted the Baylor loss to Oklahoma as a good thing that showed the committee just how good the Bears really are. Interesting note, but I still don’t ever agree with anything that Jeff Long says. TCU was slapped in the face the most out of any team in the CFP rankings as they dropped three spots to #18 even though they won against Kansas. The Horned Frogs have suffered immensely throughout the season and it was a horrible decision of the committee to drop them just because of their injuries. The committee will release their next set of rankings on Tuesday after arguably the most important weekend of the year.