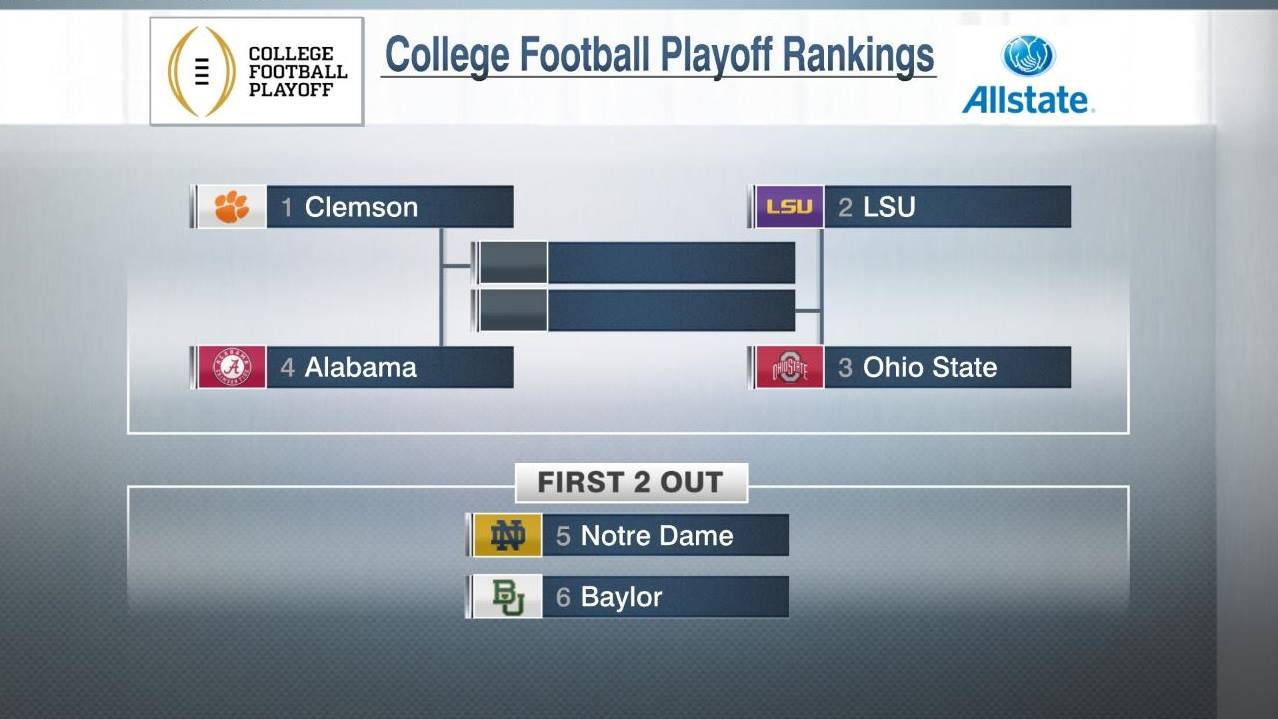 The College Football Playoff (CFP) was created to replace the Bowl Championship Series (BCS) after the 2013-14 season. The CFP’s inauguration began in 2014 under the leadership of chairman and Arkansas AD Jeff Long. Four college teams were chosen based on games won, strength of schedule, and head-to-head results in order to play in the top two bowl games (Rose Bowl and Sugar Bowl in 2014). The semifinals are played on New Year’s Eve and New Year’s day along with loads of other bowl games around the country.

The CFP is run by a committee of members that were/are coaches, student-athletes, journalists, college administrators, and athletic directors. The members of the 2015 CFP committee are Jeff Long, Barry Alvarez, Mike Gould, Kirby Hocutt, Tom Jernstedt, Bobby Johnson, Tom Osborne, Dan Radakovich, Condoleezza Rice, Mike Tranghese, Steve Wieberg and Tyrone Willingham. Each individual is supposed to provide rankings of his/her top FBS teams based on the criteria mentioned above and choose four teams to play each other in the most important bowl games. After the semifinals, the winner of the College Football Playoff is determined and will reign as the national football champions. Last year, the selection committee chose Alabama, Oregon, Florida State, and Ohio State to compete for the championship. Oregon beat Florida State and Ohio State destroyed Alabama. In the final playoff, fourth ranked Ohio State upset Oregon to become the first ever CFP champions.

The CFP committee has already proven to be a controversial group who have put more weight on a team’s strength of schedule over head-to-head wins or total games won. The release of the 2015 week one rankings forced fans all over the country to go after Jeff Long and co.’s questionable selection process. Undefeated Clemson (ACC) was placed first followed by undefeated LSU (SEC), undefeated Ohio State (Big 10), and one-loss Alabama (SEC). Independent one-loss Notre Dame came in at fifth and undefeated Baylor (Big 12) at sixth. If you’re confused as to why two one-loss teams are in the top five rather than undefeated Baylor, Michigan State, and TCU, join the majority of fans across America.

The first installment of CFP rankings can be discouraging but ultimately don’t matter until November is over. The committee has proven to be inconsistent in rankings and could still leave an undefeated team (or two) out of the playoff in December. To all you Baylor fans: do not worry about these rankings. They simply don’t matter right now. Our boys will focus on boosting true freshman QB Jarrett Stidham’s confidence as he tackles his new starting position in backloaded November and keep their eyes on the prize: win out, become back-to-back-to-back Big 12 Champions and ultimately, the College Football Playoff champions.