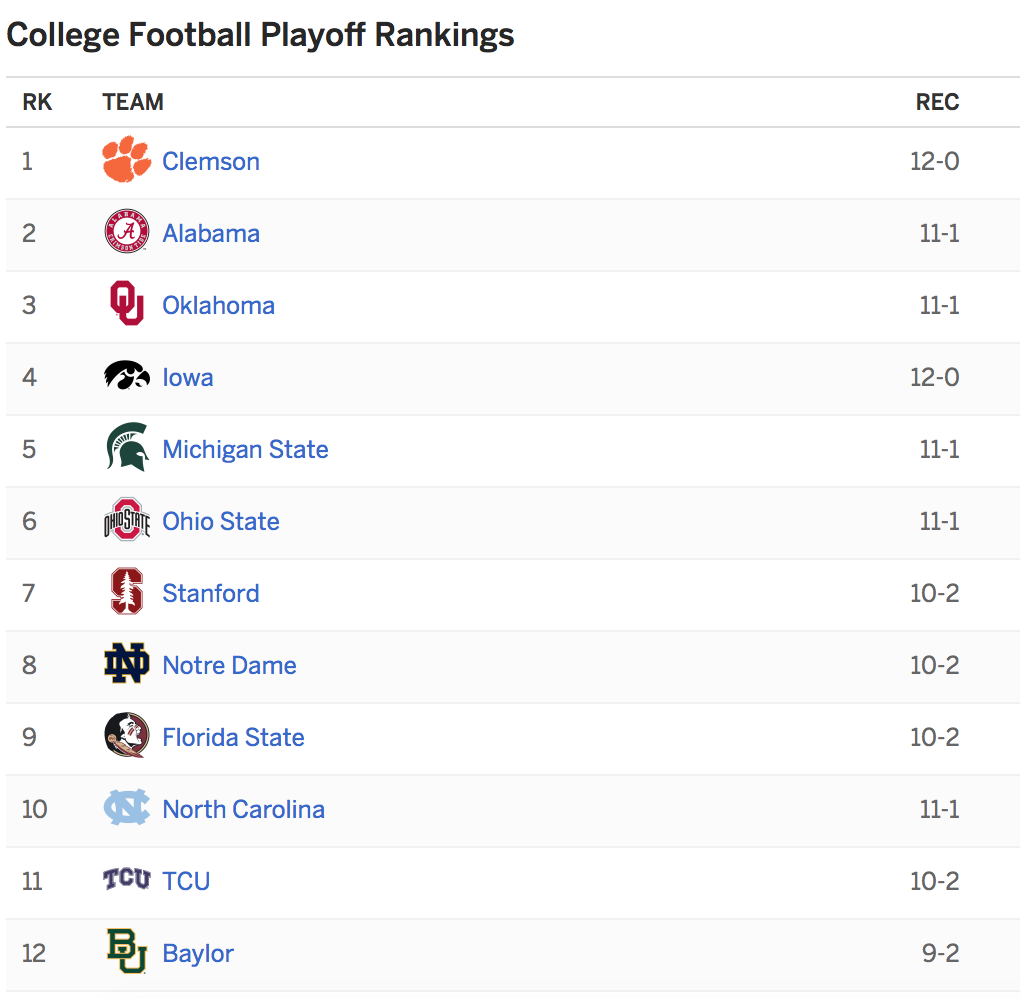 I hope you guys didn’t expect me to stop writing about football just because it’s Blogmas! The college football season isn’t over until the holiday bowl games, so my sports posts will continue throughout January. The fifth installment of the College Football Playoff rankings was released yesterday and it seems as though the committee has established their (possible) final four teams before the final rankings are released. Clemson has continued their winning streak and ended their regular season with a win against unranked South Carolina. They will look to remain undefeated after their ACC conference title game against #8 North Carolina. If the Tigers beat the Tar Heels, they will remain at the top of the four with a #1 seed. Alabama has stayed in the top four since the release of the first CFP rankings and are hoping to continue as the #2 seed with a win against the #18 Florida Gators. If the Gators upset the Crimson Tide, then I’m not sure what will happen to the overall playoff rankings. It’s possible that the committee will keep a two-loss Bama in the top four rather than boosting Michigan State or Ohio State simply because of the SEC bias, but who knows? The college football fanbase should keep their eyes glued to their TVs this weekend. #3 Oklahoma won the Big 12 title this past weekend after they beat the Oklahoma State Cowboys. After Baylor lost to TCU in what could be considered the most brutal game in college football, the Big 12 trophy’s fate was left in the state of Oklahoma. The Sooners finished the regular season with one loss against unranked Texas and three wins over top 20 teams. They are a shoe-in for the playoff. Iowa has remained at #4 but will have a major challenge this week as they face #5 Michigan State. Even though the Hawkeyes are currently undefeated, a possible loss to the Spartans could upset the whole CFP rankings and cause chaos in the college football empire. This weekend will be the most exciting and crucial out of any this whole season and football fans could expect some upsets to finish the season.