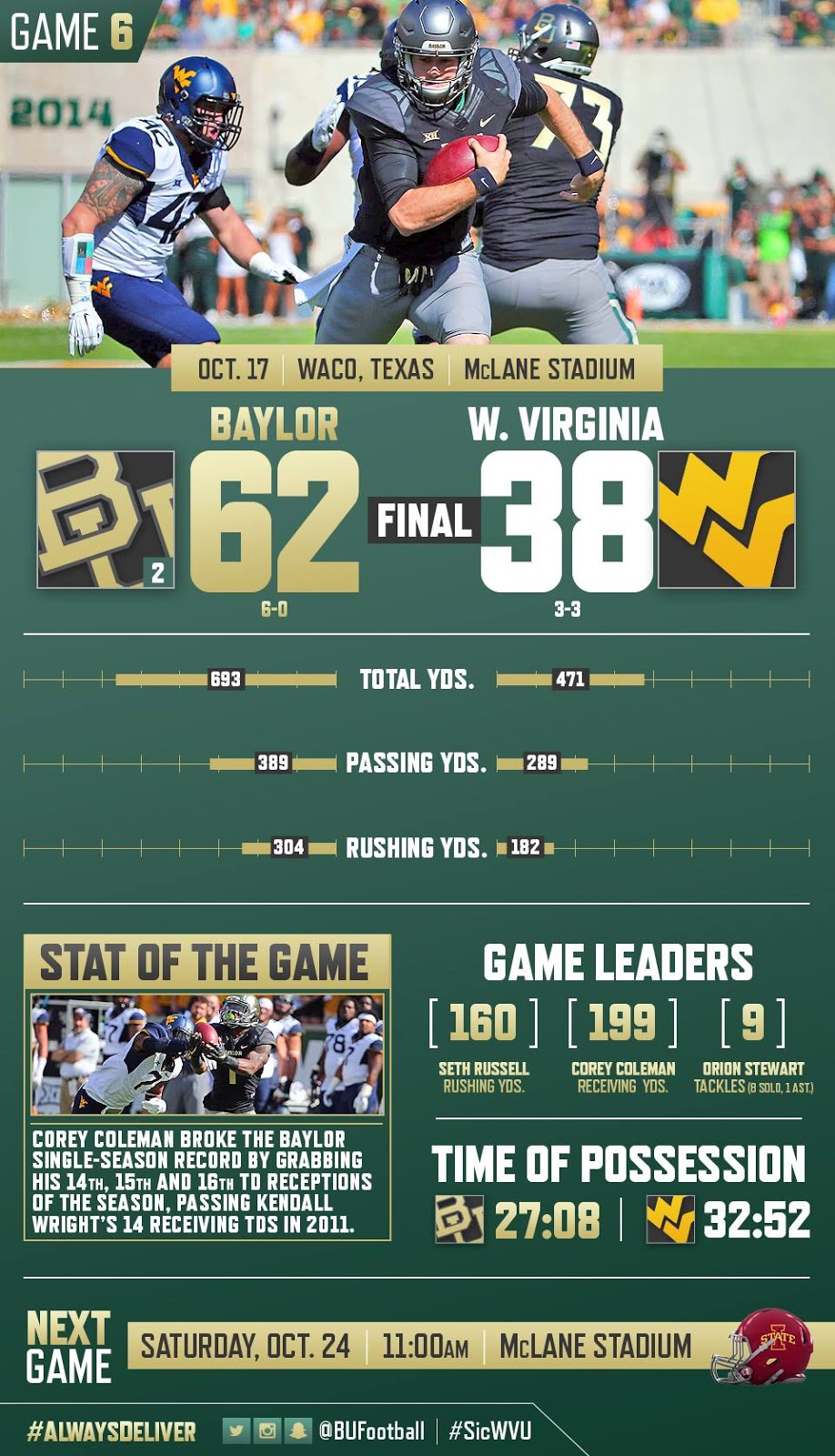 The date was October 18, 2014 when the Bears arrived in Morgantown to play the unranked West Virginia Mountaineers. What started off as sloppy passing and rushing by Baylor quickly escalated into a chaotic mess of flags thrown on nearly every play. With a total of 17 soft penalties for 205 yards (yes you read that correctly), the Bears simply couldn’t come back to win against WVU and finished the game with a 41-27 loss. This year, the Mountaineers came to McLane Stadium and the Bears were unstoppable. As arguably the strongest team in the Briles era, the offense had 693 total yards with eight TDs and two field goals. The final score in the explosive game was 62-38.

The shining star of the game was none other than QB Seth Russell who rushed for 160 yards and a TD of his own. With a combined 540 yards and 6 TDs, the QB could not be slowed down. Russell has proven to be a similar version of beloved Robert Griffin III when it comes to his speed, strength, and agility. Although he has the ability to throw deep passes like that of Bryce Petty, he exceeds his predecessor in almost every way. Russell has shown that he likes to take risks on the field. Whether it’s throwing the ball to a receiver who has two backs covering him or faking the handoff and running 30-40 yards into the end zone, the current QB under Briles is an obvious knockout.

Junior WR Corey Coleman again proved why he’s the best receiver in College Football. His speed and incredible connection with Russell allowed him to have 10 catches for 199 yards and three TDs against the Mountaineers. In just six games, Coleman has passed the school record of TDs in one season (record formerly held by WR Kendall Wright who now plays for the Tennessee Titans). Coleman now logs 16 TDs in half of the season and is on track to receiving 30+ TDs for the rest of the year. WR Jay Lee received two TDs of his own and TE Trevor Clemons-Valdez (if you haven’t heard that name before, it’s because he wasn’t on the team earlier this season) received one in the late fourth quarter.

The Baylor defense really stepped up and found their rhythm today with star players DT Andrew Billings, LB Taylor Young, S Orion Stewart, and DL Beau Blackshear. Billings was a monster in sacking WVU QB Skyler Howard for losses and a pick in the end zone by CB Ryan Reid helped the Bears’ momentum skyrocket. Even when Billings took a nasty chop block to the ankle and was helped off field, he powered through and returned to watch his team play the rest of the game. Luckily his ankle wasn’t broken and he will hopefully be back when the Bears head to Manhattan to play Kansas State. The defense held the Mountaineers to only one TD in the second half and showed their potential in an incredible way.

The Bears will play the Iowa State Cyclones at McLane Stadium on Saturday at 11 am.