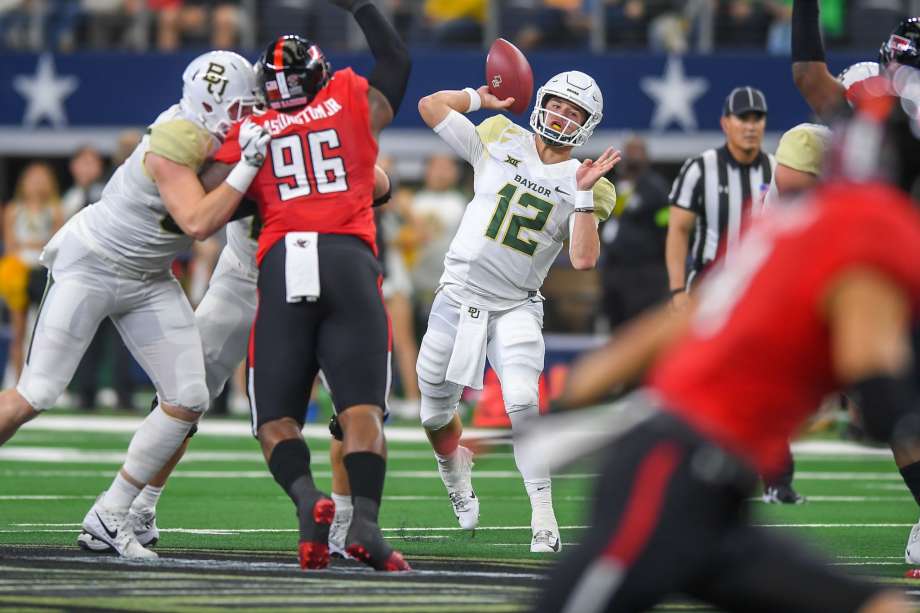 THEY DID IT!! After head coach Matt Rhule’s disappointing 1-11 inaugural season in 2017, the Baylor football team (6-6) is heading to a bowl game following their 35-24 victory over Texas Tech (5-7). The dream came true as the Bears fought tooth and nail for a chance to go bowling after a difficult loss at their last home game. At the end of last season, Rhule was confident that this group of athletes would make it to a bowl game and thankfully, he was right. The past three years have been extremely tumultuous for the team, and especially for the seniors as they experienced more pain, disappointment, and frustration than any 18-24 year olds should ever face. Three head coaches, lost recruits, transferred teammates, and vitriol from ‘fans’ and opponents alike were only parts of what these poor boys encountered during their time in the green and gold. No other group of grown boys deserves the honor of playing one more game than those in Baylor’s uniforms. *Okay, teary and emotional mini rant over, now let’s get to the game! The Bears recorded 478 total yards following sophomore QB Charlie Brewer’s 22 of 30 completions for 308 yards with three TDs and one interception. Although Baylor had three turnovers and 12 flags for 80 yards, they ate up 36:04 of the game and scored in all four of their red zone chances.

Despite senior DT Ira Lewis’ sack on Tech’s QB McLane Carter in the first drive, the Red Raiders still managed to score on a bomb downfield. Baylor responded by eating up 9:10 off the clock on a steady march toward the end zone. Brewer successfully completed passes to six different receivers including senior transfer Jalen Hurd, junior Denzel Mims, senior Chris Platt, freshman Josh Fleeks, freshman Tyquan Thornton, and sophomore RB John Lovett before finally nailing Mims for a six-yard TD near the end of the quarter. The defense held Tech to a three-and-out and forced them to settle for a 42-yard FG to close the first quarter as they led 10-7.

In the Bears’ opening series of the second quarter, Brewer’s 19-yard pass to Hurd set up a massive 41-yard score by Thornton. Tech responded with a quick 32-yard TD of their own, one minute after Baylor’s points were added to the board. Baylor’s offense seemed to go from slightly rough to awful following their back-to-back fumbles on Fleek’s kick return, a fumble on the team, and Brewer’s interception. Three consecutive punts ended the half at 17-14 in Tech’s favor.

The Bears kicked off the second half of the game in an exciting fashion as Brewer’s first pass was a 39-yard connection with Platt. Eight, seven, and 12-yard rushes by Lovett led to Brewer’s one-yard TD run. On the Bears’ next drive, Lovett rushed for three-seven yards before Brewer launched another bomb, this one a 27-yarder to Mims at the Tech 35. Lovett took control over the ball with his fifth rushing TD in 2018, closing the quarter with a 28-17 lead over the Red Raiders.

Tech nailed a TD at 14 minutes left in the game to put themselves on top. After a few passes and rushes by the Baylor offense, Brewer threw a 16-yard spiral TD to Mims, creating a bit of distance in the score. With 12 minutes left in the game and Tech given a lengthy path to the end zone on Baylor’s side, they nearly made it past the benches before sophomore CB Raleigh Texada finally scooped up an interception. Lovett and sophomore RB Trestan Enber ran their tails off, but they couldn’t make a score happen so they were forced to punt. With three minutes left in the game, the Red Raiders fought to tie up the final outcome, but sophomore DE BJ Thompson’s sack and junior LB/S Blake Lynch’s first career interception ended the game in the Bears’ favor at 35-24!

Lovett, Ebner, and Brewer all recorded rushing attempts with Lovett and Brewer each notching running TDs. Platt, Mims, Hurd Thornton, Ebner, Lovett, junior Pooh Stricklin, redshirt freshman Tyler Henderson, and junior Marques Jones caught passes including Mims’ two TDs and Thornton’s one score. The Baylor defense notched 67 tackles with six for a loss of 23 yards, two sacks for 14 yards (Lewis and Thompson), two interceptions returned for 15 yards (Lynch and Texada), five pass breakups (Lynch, junior LB Jordan Williams, sophomore CB Harrison Hand, senior S Verkedric Vaughns), and two QB hurries (Lynch and Thompson). They say defenses win championships and yesterday’s performance showed Baylor’s increasing caliber as an improving team. We are all so proud of the boys who fought to play the game they love despite countless unnecessary accusations and online bullying. And with all of the odds against them, the Bears rallied back to achieve bowl game eligibility. Let’s go now Bears!