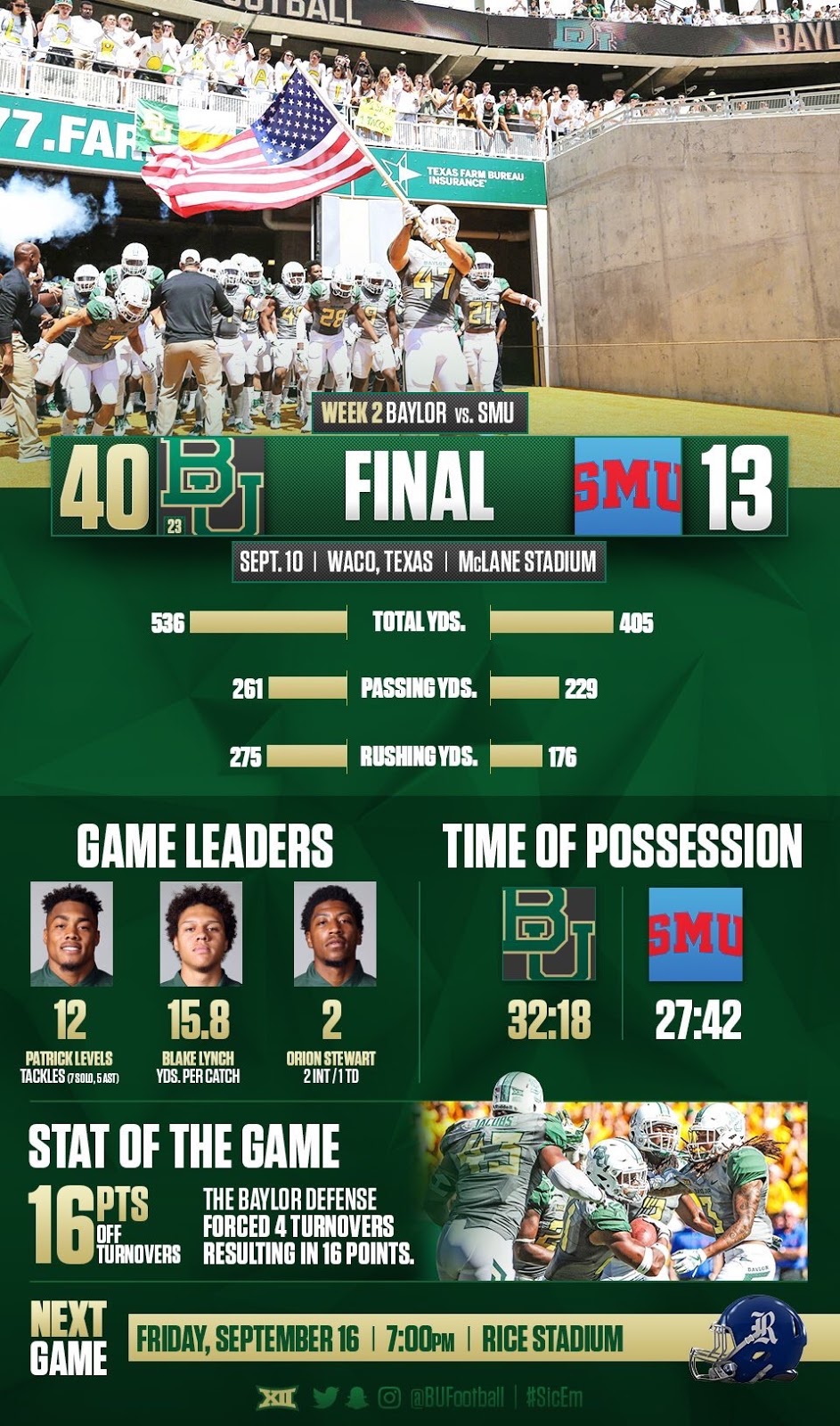 Game two of the Baylor football season is in the books and it’s definitely not one to re-read. The Bears looked like a different team as they took the field against Chad Morris’ SMU Mustangs. While Baylor’s offense struggled to find its rhythm in the first half, the defense showed up and showed off.

For the first time in who knows how long, the offense couldn’t figure out how to get the ball rolling. QB Seth Russell completed 26 passes of 47 attempts for 261 yards and 2 TDs. Now those aren’t the worst passing stats possible, but they’re certainly not up to par. Russell was unable to connect with his receivers, releasing passes that were either too deep or too short. The first quarter consisted of incomplete passes and penalties as the Bears struggled with false starts and a lack of first downs. A 22-yard pass to WR Pooh Stricklin on the first drive followed by a 35-yard field goal put the Bears on the board in the second quarter. The fourth drive of the quarter took five minutes as Russell completed passes to WRs Denzel Mims, KD Cannon and Blake Lynch before Lynch caught a 15-yarder and fumbled the ball on the SMU one yard line. P/K Chris Callahan nailed a 38-yard field goal at the end of the second quarter to keep the Bears in line before the half. RB Shock Linwood led Baylor’s first drive of the third quarter before a personal foul on SMU gave the Bears a second chance to score on third down. Russell completed consecutive passes and redeemed Lynch after he caught a 31-yard TD pass. A second interception for Russell did not help his stats, but a 19 yard rushing TD definitely did. With a score of 26-13 at the end of the third quarter, the Bears were hoping to extend their lead and put a dampen on SMU’s confidence. Russell finally showed off his power as he launched a perfect 32-yard pass to Cannon in the end zone. A JaMycal Hasty showing led to the final Bears touchdown of the night, capping the score at 40-13 with four minutes left in the fourth.

Clearly it was the defense’ night to shine. NB Patrick Levels had himself a game as he totaled 12 tackles, one for a loss of four yards; two forced fumbles and two QB hurries. Levels was a dominating presence on the field and constantly forced himself into SMU territory. Although he hasn’t started a game until this season, he’s shown maturity and poise as the temporary replacement for injured star Travon Blanchard. Now that Blanchard has been cleared to play, I’m ecstatic to see how coach Bennett will use both of their talents to traumatize offenses. The other two defensive MVPs of the night were S Orion Stewart and Davion Hall. Stewart hasn’t recently had an outstanding game but showed his senior leadership after he grabbed two interceptions and returned one for a 33-yard touchdown. Stewart recorded eight tackles, two interceptions and one touchdown in his break out game. Hall switched from WR to S in the spring and is a monster in the backfield. He got a pick in the end zone, which he returned for 62-yards. He totaled eight tackles, one interception, one pass breakup and one QB hurry. I will sing the defense’ praises for the rest of the week as they truly won the game for us.

Our biggest issues so far are an extremely weak offensive line and a D-line with a lack of depth. Our O-line showed their fragility against a mediocre team as the pocket often collapsed around Seth, leading me to worry about how our offense will do in the upcoming months. Special teams has improved greatly, which I something I never thought I would ever say about our team. WR Tony Nicholson is a speedy powerhouse with the worst luck. This was the second game in a row that he would have returned a punt for a touchdown if our players hadn’t fouled their opponents during the return. Anyhow, I’m excited to see our special teams give opposing teams a run for their money.

Baylor will play Rice in Houston on Friday at 7 pm.

Orion and Davion for team president/VP
You’ll get um next time, Tony
I want to see more of Lenoy Jones Jr.
JaMycal Hasty is my newest favorite