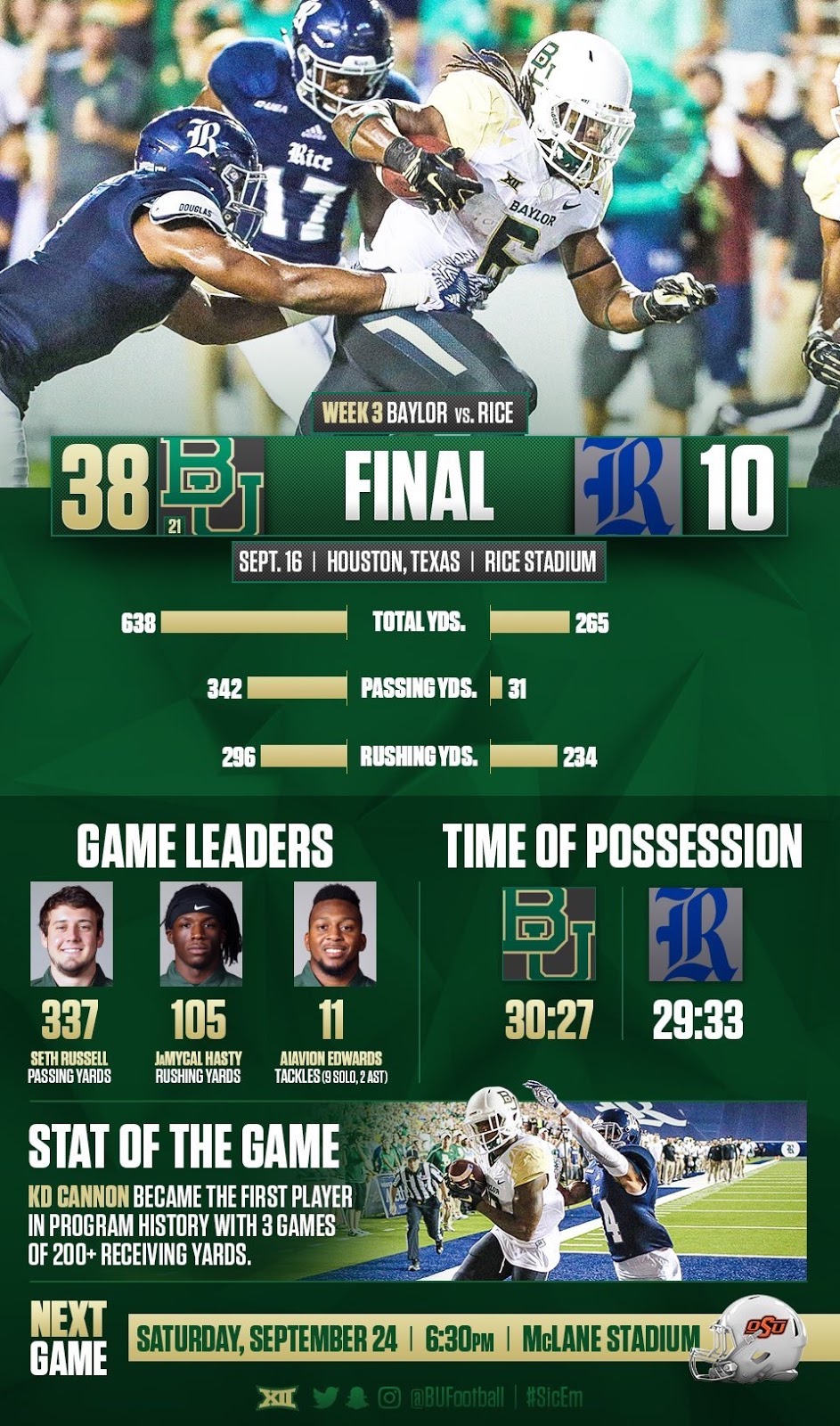 After three games, Baylor is 3-0 and is the highest ranked Big 12 team (tied with West Virginia). Yes, it can be pointed out that the Bears’ non conference schedule was much easier than that of Oklahoma, it’s still exciting to see our boys advance to the top before conference play. There are many questions before we face Oklahoma State on Saturday, so let’s get in to the Rice game.

Rice University is by no means a powerhouse team, but they gave the Bears a run for their money in the first half of the game. Baylor’s offense took more time than usual to get going and QB Seth Russell struggled to connect with his receivers. Similar to the SMU game, Russell and co.’s offense started sluggish and weak. Russell completed 22 of 38 pass attempts for 337 yards with three touchdowns and one interception. The biggest offensive problems during the game were mixed between the offensive line and wide receivers. When Big 12 play starts, it’s of utmost importance for the OL to keep Russell healthy and safe. The linemen are all young, first-time starters, but they’re going to have to start playing with maturity and poise. Russell’s incompletions were all either to WR Chris Platt or Blake Lynch- both players who struggled during the SMU game as well. The Bears will have to start catching balls in order to keep their highly touted #WRU title. Unlike Platt and Lynch, WR KD Cannon had himself a game. Cannon missed most of preseason workouts due to surgery, but he’s been gradually working himself back to 100%. It’s unfair to expect Cannon to immediately fill the receiving void left by Corey Coleman, but this season we can look to Cannon to become WR 1. Cannon totaled nine catches for 213 yards and two touchdowns. Check out his best catch of the night:

RB Shock Linwood surpassed Walter Abercrombie’s record as Baylor’s all-time career rusher after he recorded 3,675 career yards. Linwood isn’t 100% healthy just yet, but has the potential to finish the season as a star. Young RBs Terence Williams and JaMycal Hasty made moves as well on Friday, recording 12 carries for 79 yards and one touchdown, and 14 carries for 105 yards and one touchdown, respectively. TE Jordan Feuerbacher recorded one touchdown as well, for a total of five Baylor touchdowns.

Baylor favorite NB Travon Blanchard returned and made plays. He totaled nine tackles: three for a loss of nine yards, one pass breakup and one sack. Blanchard was a monster presence on the field, especially in combination with fellow NB Patrick Levels who recorded five tackles: 1.5 for a loss of four yards and 0.5 sacks. LBs Aiavion Edwards and Taylor Young dominated on the field along with DE K.J. Smith and S Davion Hall. The defense again kept the Bears in the game, which is a statement that I would have never said last year. I’m excited to see how the defense continues to improve throughout the season with the hope that our offense finds their natural rhythm.

I don’t know what our defense looked like before we had a combination of Blanchard and Levels
I like having a good defense
Where are you, Seth?
Congratulations on the record, Shock!