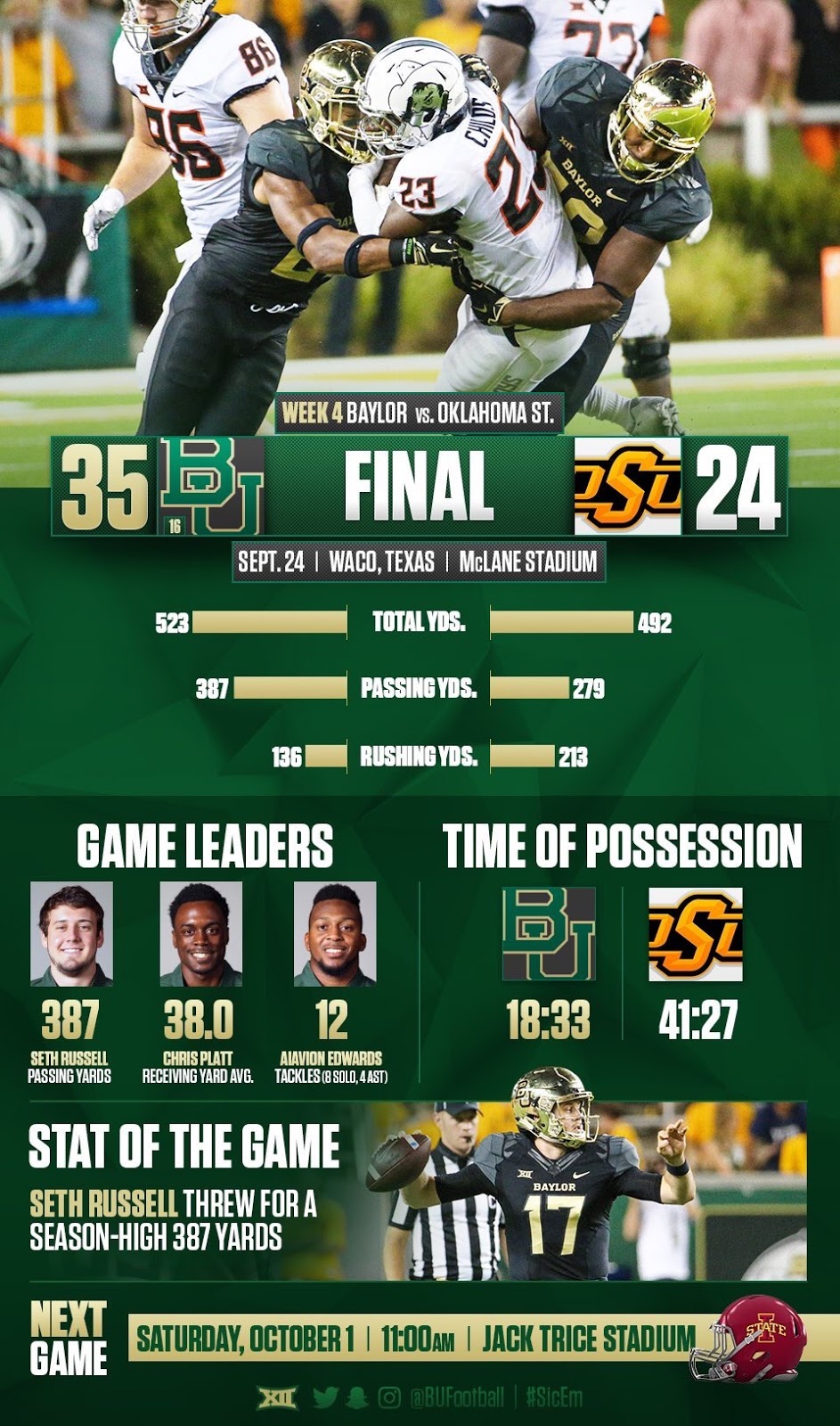 The Baylor Bears defeated the Oklahoma State Cowboys in their 2016 conference opener on Saturday night. Despite a 90 minute lightning delay at the beginning of the first quarter, the Bears powered through a strong and capable team led by QB Mason Rudolph in order to add another win to their checklist. Both sides of the ball showed promise as QB Seth Russell threw a career-high 89-yard TD pass and the defense held OkSt to 492 yards on 101 offensive plays.

Baylor has seen no better defense than its current team (in my opinion) and the players are just going to keep getting better. The dynamic duo of NBs Travon Blanchard and Patrick Levels is astonishing to watch. Blanchard has always been talented at the skill position, but his stats have proved that he is again one of the best NBs in the league. Levels has never been a star player to watch but has recently exploded on the scene, forcing fumbles, making huge tackles and developing the attitude of our new defense. On Saturday, Blanchard recorded 11 tackles; 4.5 tackles for a loss of 8 yards; one forced fumble; a pass breakup and one QB hurry. Levels totaled 8 tackles; 3 tackles for a loss of 8 yards; a fumble recovery and one sack. The defense has hands down saved the team over the past four games, stealing interceptions and sacking QBs left and right. S Orion Stewart had himself a game, recording 11 tackles; a pass breakup and a game-sealing interception at the end of the fourth quarter. Stewart has had three interceptions over the past four games, one of which he returned for a touchdown while the other two saved the games. The first half of the game saw two fumble recoveries by Levels and CB Verkedric Vaughns, which both turned the momentum in Baylor’s favor. One of the best efforts I’ve seen from the Baylor defense was in the beginning of the fourth quarter where OkSt’s rushing offense pushed through to the BU 4 yard line. The Pokes decided to go for it on fourth and three, but their RB was tackled by Blanchard and DE K.J. Smith before he could get past the three. Where most fans gave up on the defense on the previous drive, it was incredible to see the pass rushers stop the opposing offense on a goal line stuff. The next drive had another fumble recovery by Blanchard before Stewart’s game-winning interception. Although they gave up 492 yards, the defense was on the field for over 40 minutes and had a remarkable performance against a Big 12 title contender.

The offense showed extremely bright spots throughout the game even though it wasn’t their best performance. QB Seth Russell completed 18 passes of 28 attempts for 387 yards with four touchdowns and one interception. The Bears started off fast with a 23-yard rushing touchdown for RB Terence Williams. WR Ishmael Zamora caught the next 38-yard touchdown pass to give the Bears a 14-7 lead at the beginning of the second quarter. Another 38-yard touchdown to Zamora gave Baylor some breathing room after the Pokes tied up the game. The first drive of the third quarter saw Russell hit WR Chris Platt for an 89-yard touchdown, the longest of Russell’s career. A second touchdown pass to Platt in the fourth quarter sealed the deal as Stewart’s interception and a last second sack by DE Xavier Jones gave the Bears the ball game.