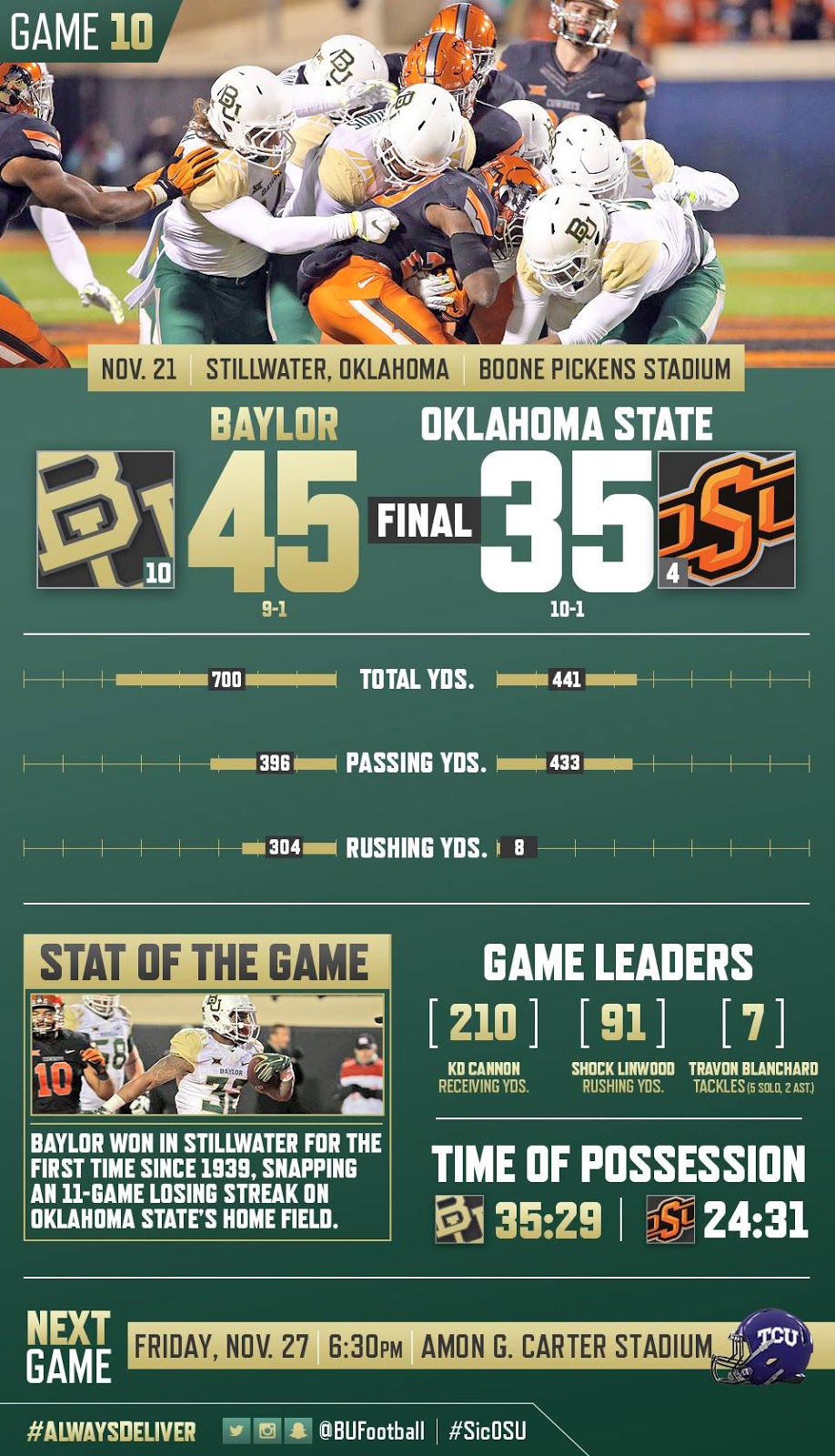 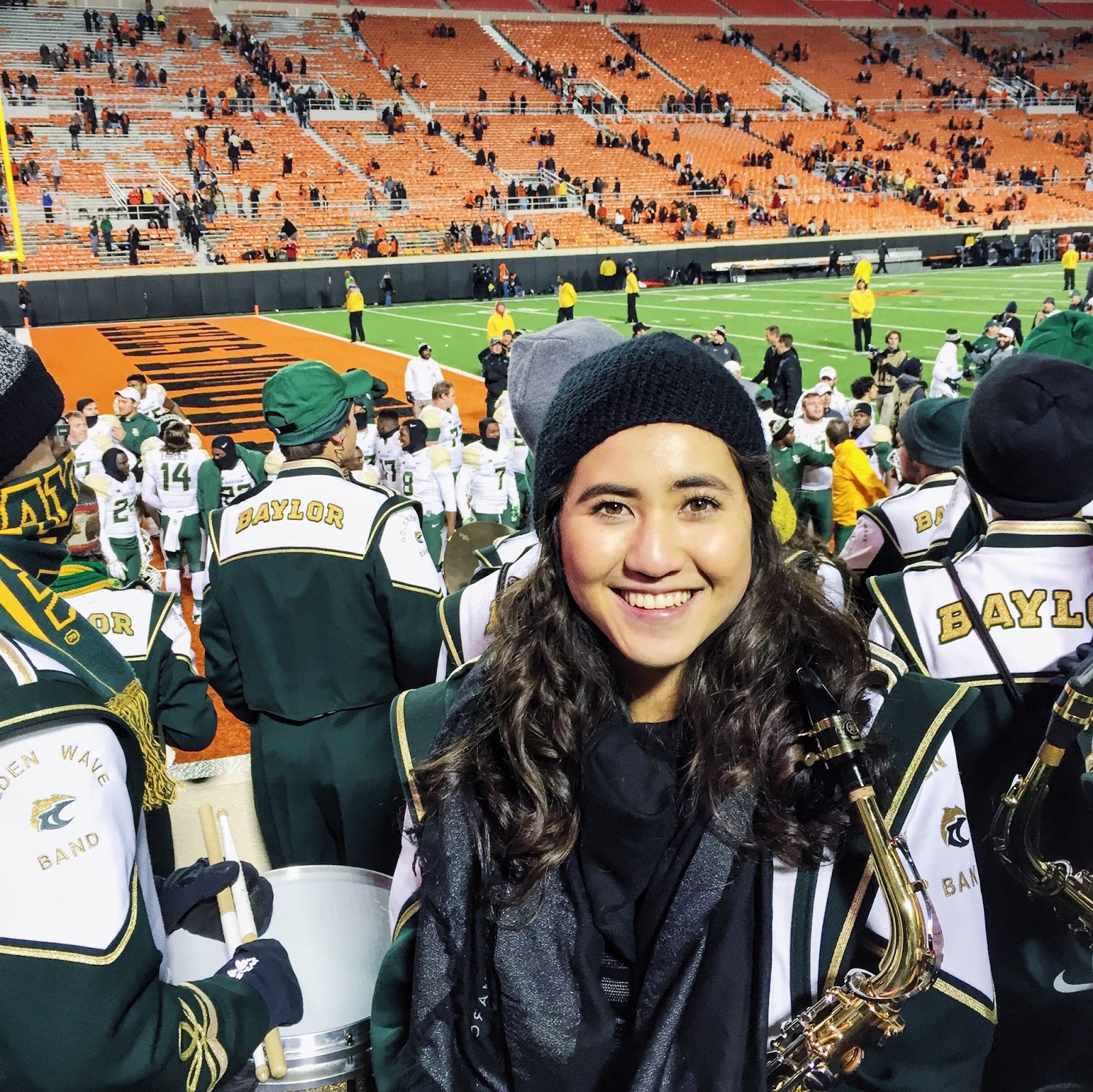 The year 1939 holds many notable events such as the start of World War II, the presidency of Franklin Delano Roosevelt, the birth of legendary football coach Bill Snyder, and the last time that Baylor football beat Oklahoma State in Stillwater. The curse of Stillwater has resonated with the Bears for 76 years and finally, after nearly eight decades, the curse has been broken! The Baylor Bears played their best overall game of the season (and of the past two seasons in my opinion) and destroyed Oklahoma State’s 10-0 record and any hope they had of a spot in the College Football Playoff. Many of the Bears’ starters have been beat up within the past few weeks with starting QB Seth Russell, DTs Beau Blackshear and Byron Bonds, and S Orion Stewart and Terrell Burt all out with injuries, but the Bears overcame their adversities to earn a historic road win in Oklahoma.

Although he injured his back on a late hit during the Oklahoma game, QB Jarrett Stidham threw deep passes with beautiful accuracy. During the first play of the game, Stidham threw a 48 yard pass to WR Corey Coleman, which set the Bears up for a five yard TD by RB Shock Linwood. Less than three minutes later, WR KD Cannon caught a 59 yard TD pass from Stidham, creating a 14 point lead over the Cowboys. The usually-quick offense took a longer route running 13 plays for 83 yards before RB Devin Chafin could haul in a one yard TD in the beginning of the second quarter. The Baylor offense extended their lead to 10 points with a 34 yard field goal by Chris Callahan. Stidham completed 12 of 21 pass attempts for 258 yards and one TD in the first half before injuring his wrist, fibula, and back. He was limping toward the locker room during halftime and wouldn’t return to the game at all in the second half.

The defense shone brightly throughout the entire game with six sacks while holding the Oklahoma State offense to only eight rushing yards. LB Grant Campbell recovered a fumble during the Cowboys’ first possession and hauled it in for a TD that would be called back. This quick move by Campbell set the tone for the defense’s aggressive performance in the game. Forcing seven consecutive punts and consistently putting pressure on Cowboys’ QB Mason Rudolph, the Defensive line played their best game of the year. Rudolph was sacked for a loss of four yards during the beginning of the first quarter by LB Taylor Young, which began the series of pressure by the defensive linemen. DE Shawn Oakman sacked Rudolph for a loss of two yards and was followed by a rushed sack by LB Aiavion Edwards two plays later. Edwards ran straight up the middle as the Cowboys’ offensive line broke apart and sacked Rudolph in a very Bryce Hager-like manner. DC Phil Bennett needs to start giving Edwards more big plays like this one. A huge play in the beginning of the second quarter was completed when NB Travon Blanchard sacked Rudolph for a loss of nine yards at the OSU49, which forced the Cowboys to punt the ball in the first of their seven consecutive punts. Rudolph was sacked by Edwards for a loss of six yards and then by DT Andrew Billings for a loss of 10 yards before being penalized for intentional grounding. Billings followed suit with a Rudolph sack for a loss of seven yards in the beginning of the third quarter. DE Jamal Palmer sacked Rudolph for a loss of six yards to hold the OK-State rushing offense to only eight yards in the game. The secondary was on target all night with CBs Ryan Reid and Xavien Howard and S Chance Waz breaking up deep passes and keeping tight coverage on the WRs.

The star of the night was none other than third string QB Chris Johnson who started in the second half after Stidham’s injuries took over. He stepped in and immediately starting throwing deep passes- as any Baylor QB would- and completed five of 10 attempts for 138 yards and two TDs. Johnson has been listed at WR for the whole season but stepped up to the plate when Stidham couldn’t. His large frame: 6’5 and 235 lbs, strong arm, and quick feet make him the perfect candidate to step in at QB. Thanks to Johnson in the second half, the Bears prevailed and showed that they can be dominant on both sides of the ball. Baylor Assistant Athletic Director for Athletic Performance Kaz Kazadi always says that we don’t have any backups on the team and on that freezing night in Stillwater, Chris Johnson proved the accuracy of that point.