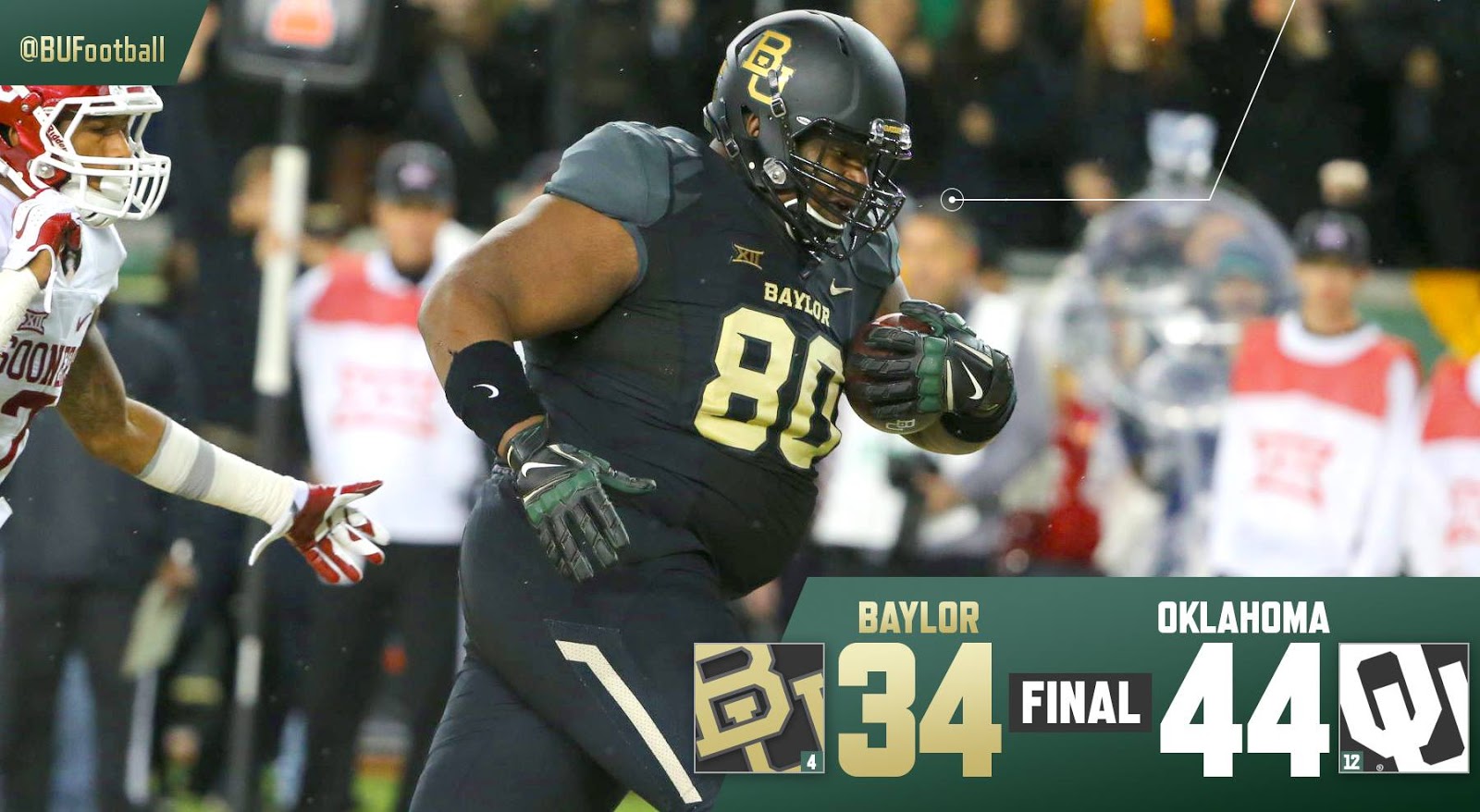 This won’t be my typical weekly recap. I won’t discuss passing/rushing stats, penalties, turnovers, or the lot. It doesn’t seem necessary to rehash all of the what-ifs or could-have-beens. The Bears struggled at home for the first time since 2012 against the Oklahoma Sooners. What started off as an amazing opportunity to host ESPN College Gameday turned into a heartbreaking loss on our own turf. I expected the Sooners to bring challenges to Waco, but never could have predicted the events that would unfold in McLane.

The Bears excelled in their first scoring drives by using RB Shock Linwood’s strong rushing game and QB Jarrett Stidham’s strong arm. We scored quickly as usual and were on track to an incredible game. It wasn’t until freshman QB Jarrett Stidham was sacked and injured his back on a late hit by an Oklahoma defender that the momentum of the game did a 180. After Stidham’s injury, OC Kendal Briles called strictly rushing plays that simply couldn’t get the Bears a first down. Linwood was blocked off the middle by Oklahoma defenders and was stuck at two-three yards per play at most. The Sooner defense stopped our rushing game up the middle and unfortunately, K.Briles continued to call for Linwood to rush straight towards defenders. The offense was unable to get in rhythm after Stidham’s back injury and was held to a total of 34 points. The hands down offensive highlight of the night was TE LaQuan McGowan’s five yard TD, which lit up the entire stadium after many consecutive punts from our special teams.

The Baylor defense surprisingly shone brightly throughout the game. Of course, we gave up 44 points and 500+ yards, but without LB Grant Campbell, DE Jamal Palmer, and CB Ryan Reid, we wouldn’t have tightly held the game. DC Phil Bennett called great plays that turned into some big stops on the OU offense. Unfortunately, our offense couldn’t capitalize on the defense’s efforts and we ended up punting instead of scoring throughout the game. Our starting defenders ended up injured throughout the game, which also hurt our chances of winning. S Orion Stewart went down in the third quarter and shortly after, S Terrell Burt fell to the ground in what was perceived to be a ‘fake injury’. Burt’s dropping to the ground was forced by teammate Ryan Reid after knowing that Burt was injured from the kickoff.

It’s in no way Jarrett’s fault that we lost the game. Oklahoma pulled out all the stops against our banged up defense and our injured QB forced K.Briles to call safe, conservative plays. Unfortunately, the false penalties on DE Shawn Oakman, RT Patrick Colbert, and others gave OU an edge to use against us. The most disheartening parts of the game were when the OU fans cheered as S Orion Stewart fell to the ground in injury and when ESPN ‘analyst’ Kirk Herbstreit called out S Terrell Burt on national television for faking an injury. I won’t get into either of those occurrences because they’re both over and done with. However, with an already struggling Baylor team playing their worst game of the season, it was frustrating to see bad things happen to good people. The worst part was watching the time slip away as four minutes were left and Stidham threw an interception to end the game. The minutes quickly went by and soon enough, we were defeated in our own home.

If you read my post two days ago about my relationship with football, you’ll know how badly this loss hurt me. I’ll admit that while sitting in the band section, I cried as Stidham’s pass was picked off and I continued to sob in my soaking wet marching band uniform until we got back to our indoor facility after the game. Seeing our boys play their hearts out even though they were all bruised and battered was heartbreaking. Watching the game slip out of their hands was even worse. Singing “That Good Ol’ Baylor Line” as they hung their heads in defeat at the end of the game was the final twist of the knife in my football heart. Unfortunately, we lost a tough game on our home turf. There’s no easy way to get over that. However, we have an even harder game coming up in Stillwater on Saturday against a highly ranked Oklahoma State. We have to stand together and rise up from the ashes. We can’t let the Kirk Herbstreits or the doubters in the world stop us from accomplishing our goal of another Big 12 Championship. Our boys will stay strong and they will play their best throughout the rest of the season. I believe in them and despite the crying, I know that everything will be okay.