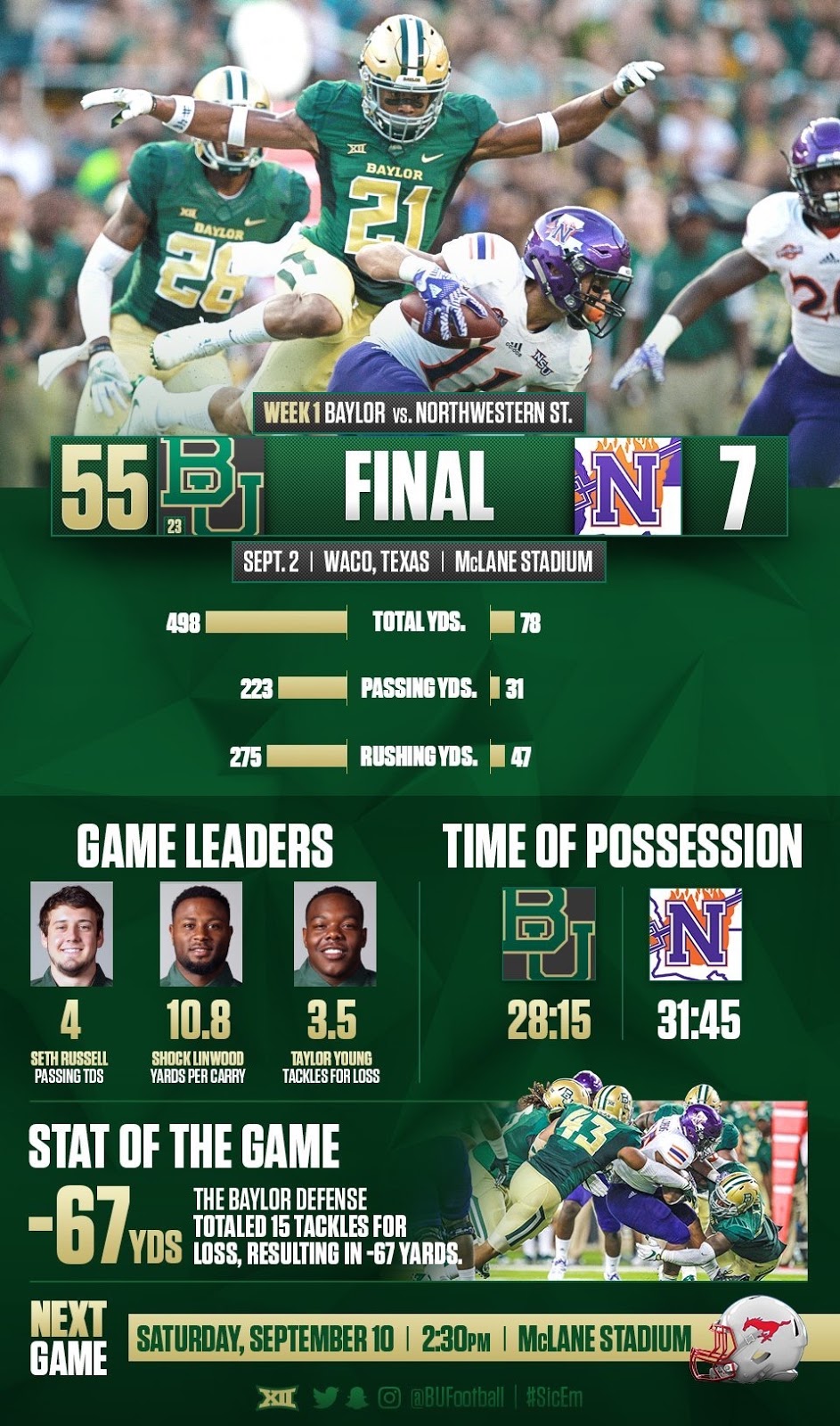 Baylor football is back! I’ve been waiting for what seems like an eternity to watch my favorite players take the field. The Bears, who opened their season against the Northwestern State University Demons, did not disappoint. After a historically tumultuous offseason, I’m not alone when I say that I was excited to finally talk about football again. The Bears revealed the same spread offense and a refreshed defense led by unfamiliar faces. Although both sides of the ball have dealt with training up younger players, the team showed their new cohesiveness as they totaled 498 yards and only played their starters for the first half of the game.

After nearly 10 months without football, QB Seth Russell’s passing game seemed to be exactly the same as it was in his 2015 record-breaking season. Russell completed 14 of 20 attempts for 163 yards and four TDs. The leading rusher of the night was none other than previously injured RB Shock Linwood, who rushed for 42 yards within 12 minutes of the game. 48 yards of Shock led to a 13 yard rushing TD by Terence Williams at the 10 minute mark of the first quarter. In Baylor’s second drive, a holding penalty on C Kyle Fuller stopped the Bears from scoring six, but a 23 yard field goal by Chris Callahan made the score 10-0 Baylor. Three first downs later, a combination of Linwood and WR Chris Platt set up an easy four yard score to TE Sam Tecklenburg, another TD for BU. Russell’s main man in Baylor’s fourth drive was star WR KD Cannon who caught back-to-back passes, setting up easy rushing yards for Williams before catching a six yard TD. Baylor started the second quarter with a 33 yard field goal before scoring another TD by TE Jordan Feuerbacher. The next series showed off Russell’s cannon of an arm after he launched a beautiful 45 yarder to WR (sometimes QB) Lynx Hawthorne, leading to a 10 yard TD by WR Pooh Stricklin (keep an eye on this one, this kid is going to be a star). Baylor’s second string true-freshman QB Zach Smith slung a 19 yard pass to WR Blake Lynch before handing off a TD to Williams in his college debut. At this point in the game, it’s the end of the second quarter and Baylor is up 48-0. In their last scoring series (beginning of the third quarter, mind you) RB JaMycal Hasty was the RB of choice as he rushed for 45 yards, setting up a 12 yard Blake Lynch TD. The rest of the game gave RSFr QB Zach Bennema a chance to play as the Bears tried to run the clock down. RB Wyatt Schrepfer showed off as he was Bennema’s right hand man. Although Baylor didn’t score after Lynch’s TD in the third quarter, it was nice to see the third stringers get some playing action in. It would be a travesty if the worst case scenario happens and our young guys aren’t experienced enough to keep the game going.

Defensive coordinator Phil Bennett showed off the pipes on his younger starters as fresh faces were seared into the memories of Baylor fans. NT Ira Lewis was phenomenal, recording three tackles for loss and one QB hurry. However, it’s worth noting that Lewis’ presence on the field outshone his actual statistics. He dominated all of NSU’s offensive linemen and obviously scared the crap out of QB Brooks Haack who finished by completing 3 of 13 attempts for 14 yards after being sacked twice. LB Taylor Young found a sweet spot that we haven’t seen since his freshman year as he totaled six tackles, 3.5 for a loss of 21 yards and one sack. LB Clay Johnston followed suit as he recorded five tackles with 2 for a loss of 12 yards. The rest of the defense stacked up and held the Demons to just 78 total yards of offense and had been in the negative yardage for most of the night.

Although we lost a good number of familiar faces in the offseason crossfire, it’s safe to say that the team I love is back and better than ever; not only in football but also off the field. With the greatest staff of coaches behind them, the 2016 Baylor football team will be one for the memory books.

Ira Lewis is going to be a star
Where has Tony Nicholson been all my life?
Damn, JaMycal Hasty can run
WELCOME BACK SHOCK
Love you Seth