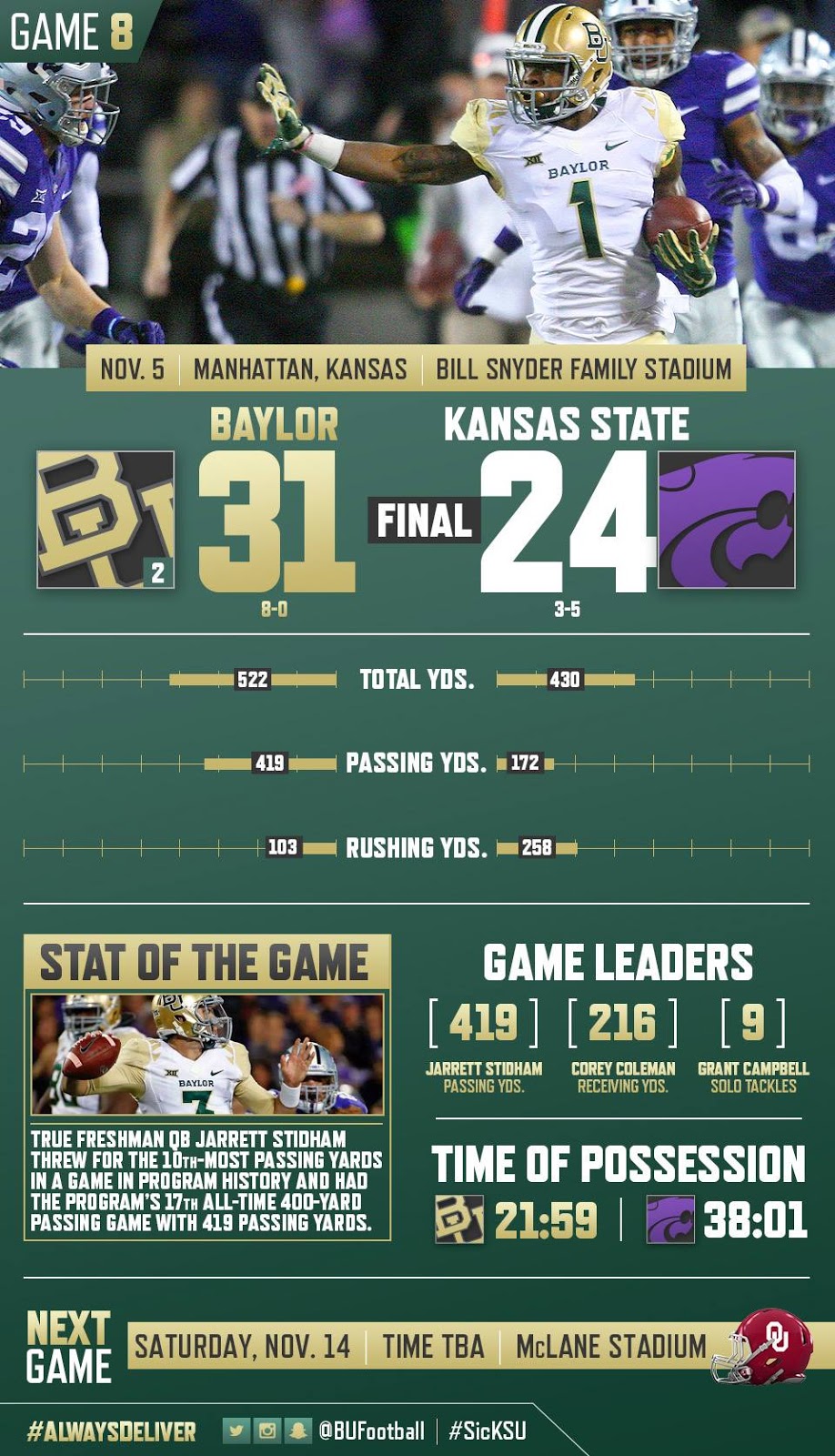 A Thursday night game in Manhattan, Kansas was the stage for Baylor true freshman QB Jarrett Stidham to shine in his starting debut. After star QB Seth Russell broke a bone in his neck during the homecoming game against Iowa State, 19-year-old Stidham from Stephenville, Texas suddenly became the captain of the #2 football team in the country. Russell’s record-setting seven games put more pressure on the freshman as critics and fans alike compared the two QBs’ skill sets. Most analysts had no faith in Stidham, saying that a true freshman would crumble under the weight of a playoff-caliber team. They argued the idea that although Stidham played in every game of the season, six minutes of rubbish fourth quarter time proved nothing about his speed or ability to throw the ball. Coach Briles and the Bears disagreed and said that he doesn’t look like, think like, or play like a freshman. He is different. Jarrett took the field in Manhattan (seemingly) without worry or comparison to Russell. And boy did he shine. He finished the game of 23-33 completed passes with 419 yards for four TDs and zero turnovers.

Stidham exploded quickly with a short pass to WR Corey Coleman who ran an easy 35 yards for a first down. At 1st and goal on the KSU 3 yard line, Stidham faked the handoff and ran the ball into the end zone for an easy TD. After a score from KSU, Stidham found WR KD Cannon for a 40 yard TD with three minutes left in the third quarter. Before K-State could score again, DE Jamal Palmer forced a fumble that was recovered by LB Grant Campbell. The defense stepped up again when CB Ryan Reid intercepted a pass for his third pick in three straight games. In the second quarter (arguably the most beautiful pass thrown this season), Stidham locked on to Coleman for an 81 yard TD, leading the Bears to a 21-7 score. At the KSU three yard line, Stidham hooked up with Coleman again for a TD in which he leaped over a defender to catch the pass. Coleman received two TDs and ran for 216 yards. When the Wildcats were only down by seven points with 51 seconds left, they went for a double pass that was intercepted by S Terrell Burt who saved the game.

Although the Bears didn’t put 60 points on the scoreboard over the Snydercats, the team fought hard and pulled out a win in Manhattan. Stidham shocked his critics in his complete passes and connection to his receivers and the defense pulled out big stops that ultimately won the game for Baylor. The Bears will play Oklahoma at McLane Stadium on November 14 at 7 pm. College Gameday will also be in Waco for the game!