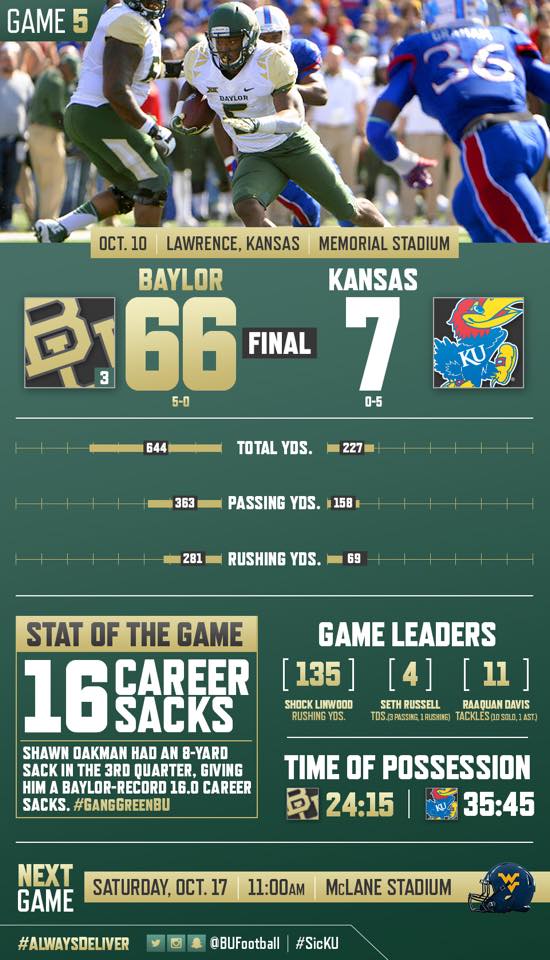 The Bears completely dominated this week with a 66-7 win over the Kansas Jayhawks in Lawrence. QB Seth Russell threw for 246 yards and three TDs in the first half before being replaced by backup QB Jarrett Stidham after halftime. Russell connected with WR Corey Coleman twice for 108 yards and RB Shock Linwood rushed for 135 yards and one TD. Arguably the most exciting pass of the game was when Russell threw to 400-lb TE LaQuan McGowan for an 18 yard TD. The small Baylor section in Lawrence erupted and gifs and videos of the TD showed up all over social media. McGowan’s response to his TD reception was, “I told myself, if he (referring to the Kansas defender) stays up high, I’d run him over and if he went down low, I would either hurdle him or sidestep him. I’m not very good at hurdling, so I thought sidestepping would be better,” (ESPN). The Bears’ defense showed up with back to back turnovers by with a pick by CB Xavien Howard and a fumble forced by NB Travon Blanchard. RB Johnny Jefferson got in on the action with a TD before Howard picked up a fumble and returned it for a 30 yard score. Star DE Shawn Oakman became Baylor’s All-Time Sacks Leader with a career high of 16 sacks. The offense piled on the TDs with a score of 52-7 to end the first half.

The offense starters were held on the sidelines after halftime and the defensive starters quickly followed. Second-string QB Jarrett Stidham hit two scoring passes with 37 yard and 30 yard TDs to WRs Ishmael Zamora and Davion Hall, respectively. With a 59 point lead, the Bears kept the ball on the ground and ran out the clock before ending the game at 66-7. Baylor will play the West Virginia Mountaineers at McLane Stadium on October 17th.