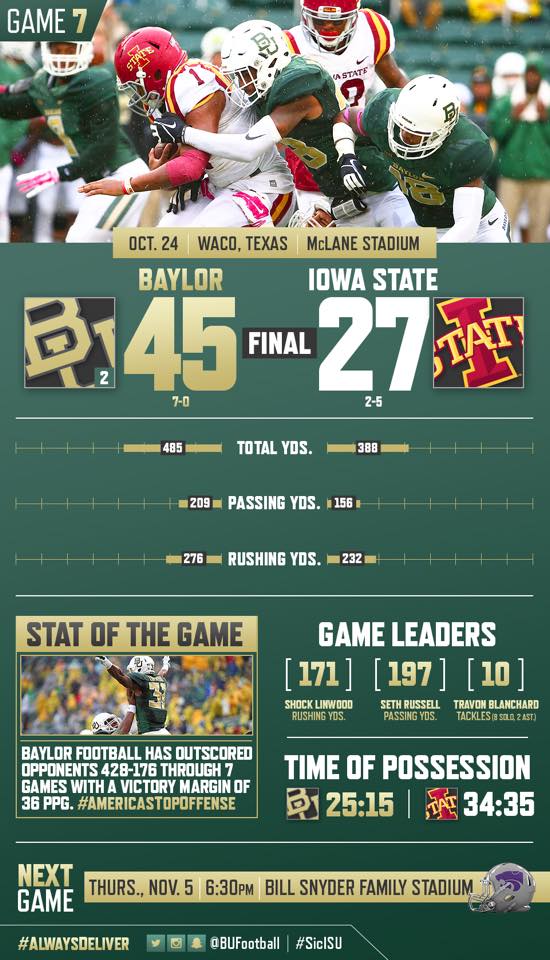 The stage was set for an ugly homecoming weekend in Waco with treacherous winds and thunderstorms. Although the annual Friday night bonfire and Saturday morning parade were cancelled due to dangerous weather conditions, the Baylor Bears suited up for their afternoon game against the Iowa State Cyclones.

The Bears were productive in the first half with 377 yards and a 35-7 lead. The first big drive of the game resulted in a 36 yard TD pass to WR Corey Coleman despite heavy coverage by a Cyclone CB. A Baylor defensive stop resulted in an Iowa St fumble recovered by NB Travon Blanchard. The defense took advantage of the Cyclones’ offensive mistakes and got the ball back at the Baylor 45 yard line. The ideal field placement helped QB Seth Russell to achieve a 37 yard rushing TD. The speedy play was paralleled by a 17 yard TD run by RB Shock Linwood shortly afterward. The Baylor defense answered their counterparts with a pick by CB Xavien Howard resulting in a two yard rushing TD by RB Devin Chafin who was back on the field after a three week injury hiatus. CB Ryan Reid picked another Cyclone ball following the Baylor TD. The Bears’ 35 points at the end of the half were on the scoreboard for the entire third quarter without any additions as the team started to bobble.

QB Seth Russell had an understandably rough time in the monsoon conditions during the game. He passed for a season low 16/37 for 197 yards and 2 TDs with 1 rushing TD and 1 INT. A couple of sloppy plays in the rain forced an intercepted pass and Russell just couldn’t connect with his receivers as well as he had in the past. A hard hit on the QB on third-and-five resulted in Russell on the bench with an unknown neck injury and Coach Briles called for a field goal attempt. Russell was then swapped out for true freshman QB Jarrett Stidham (who, luckily, has played in every game this season). The Baylor defense stepped up and stopped the Cyclone’s momentum when DE Jamal Palmer forced a fumble that was recovered by DE K.J. Smith at the Iowa State 23 yard line. Stidham and co. ran the ball and passed to Coleman for a 12 yard TD.

It’s unknown whether or not beloved QB Seth Russell will be back in time for the Kansas State game in Manhattan on November 5th. He will see a specialist tomorrow to determine what the extent of his injury is and how to treat it.