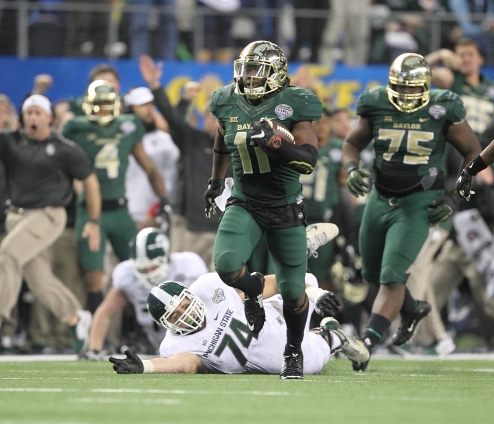 After the departure of Coach Briles and at least a dozen current and future players, the football team’s roster had quite a shakeup. Starting spots on both sides were suddenly available as the team welcomed walk ons and late additions. Injuries and academic issues continued to plague the team as players such as DE Brian Nance, RB Johnny Jefferson, S Taion Sells and DT Byron Bonds were no longer able to play. Playmaking spots are now wide open and I have a feeling that a handful of players will make a huge impact on the upcoming season.

NB Travon Blanchard- Junior Blanchard has already seen lots of playing time at nickel over the past few seasons. A two-year starter, Blanchard could be the key to a solid defensive effort. With the defensive line being a major concern for the team, Blanchard could loan his skills to either the 3-4 alignment or in the backfield as an extra safety. His stats show his versatility on the field and his press quotes reveal his strong character. Look to Blanchard for leadership both on the playing field and in his everyday life.

LB Taylor Young- Taylor Young was one of my first favorite football players ever. Now a junior, the linebacker has been a menace on the field since his first game as a redshirt freshman. Even though he’s not the largest player, Young’s passion and strength outshine his size. He will be a crucial element to the 3-4 defense along with fellow LBs Aiaivion Edwards, Raaquan Davis and JUCO transfer Thomas Cletcher.

QB Seth Russell- There’s currently no player on the team who’s of more importance than senior QB Seth Russell. With all of the uncertainty in the offseason, Russell was a shining light for his fellow teammates and all of Baylor nation. Russell was undefeated as a starter last season before he went down with a broken neck and was one of the best quarterbacks in the nation. After such a horrible injury it will be interesting to see Russell’s abilities back on the field once more. He will undoubtedly be the leading figure for 2016 Baylor football and is of great importance to today’s team.