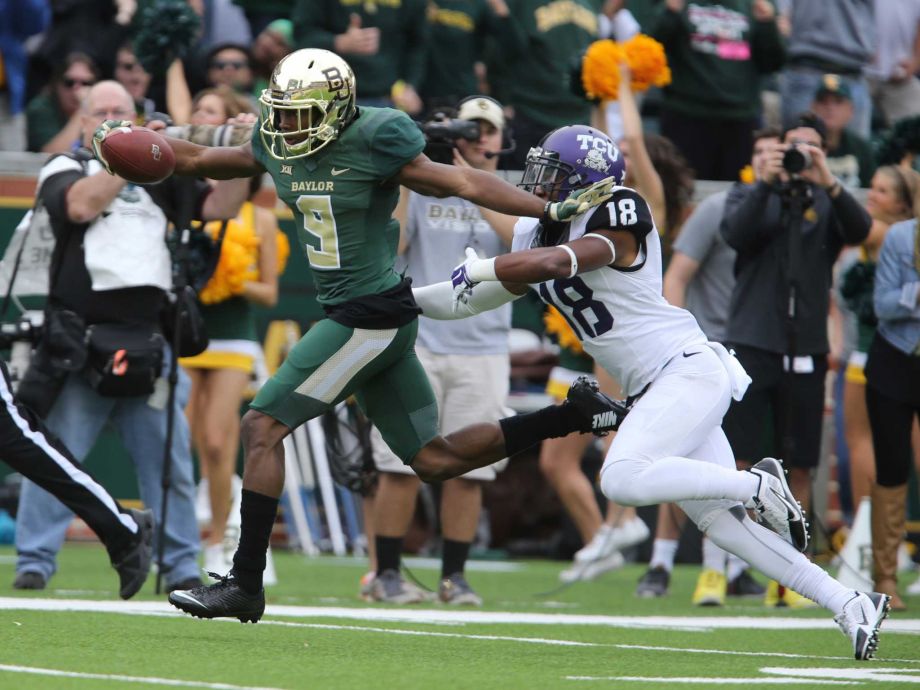 The second best known part of Baylor football is their crew of receivers. Many have dubbed the Bears #WRU (wide receiver university + sorry for including a hashtag in my post) for good reason! The football team rose to great heights with connection between quarterback Robert Griffin III and wide receivers Kendall Wright and Terrance Williams. Wright holds the title of Baylor’s all-time leading receiver in catches, yards and touchdowns. He was a first-round pick to the Tennessee Titans and has contributed to the team’s modest success. After Wright left, Williams stepped into the No. 1 receiver position and commanded attention on the field. Many will remember his infamous touchdown catch from RGIII to end the 2011 Oklahoma game.

The catch inspired football fans across the nation and contributed to Baylor’s success down the field. Players like Wright and Williams passed the torch to Antwan Goodley, who shined in his junior season. Goodley recorded 71 catches for 1,339 yards and 13 touchdowns as a junior, but battled injuries in his final year, which paved the way for sophomore Corey Coleman and true freshman KD Cannon to blossom. Coleman improved greatly over his past four years in college ball and became Baylor’s school record holder in career (33) and single-season TDs (20).After boasting two-time All-American awards, Coleman also won the Biletnikoff award, which is presented to the nation’s top receiver.

KD Cannon was a dominating presence on the field during his freshman season, totaling 58 catches for 1,030 yards and 8 touchdowns. Along with the likes of Wright, Williams, Coleman and Cannon, other receivers such as Levi Norwood, Tevin Reese, Josh Gordon and Jay Lee have all contributed to the new-founding WRU. In the 2016 season, Baylor receivers have huge shoes to fill with All-American Coleman playing for the Cleveland Browns (alongside RGIII and LT Spencer Drango!) and Lee with the Detroit Lions. Cannon will have to step up as the No. 1 receiver after a mediocre sophomore season. Luckily, the Bears’ are deep in receivers and have more than enough talent on the roster for the 2016 season. Look for WR/KR/former QB Lynx Hawthorne to make appearances along with fellow upperclassmen Quan Jones, Chris Platt and Ishmael Zamora. Exciting freshman additions are Tren’Davian Dixon, Blake Lynch and Pooh Stricklin- all highly touted recruits and tremendous athletes.