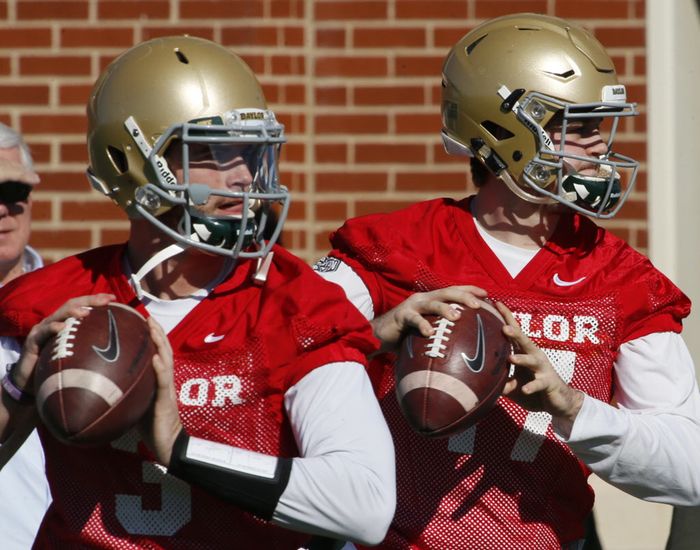 If there’s one aspect of football that Baylor is known for, it’s their star quarterbacks. Robert Griffin III started the recent chain of strong-armed team leaders whose skill set clicked in the spread offense. After winning the first Heisman trophy in Baylor’s history, RGIII decided to forgo his senior year in favor of the NFL draft. Nick Florence took over once Robert left for the NFL and the team didn’t miss a beat. Bryce Petty stepped under center during the 2013 season and led Baylor to its first back-to-back Big 12 championships. When fans and critics alike thought that Petty was the best we could get, underestimated junior Seth Russell took over the starting position and proved everyone wrong. Russell was hands down the best quarterback in the 2015 CFB season before breaking his neck, leading the nation in yards per pass (10.5), pass efficiency (189.7) and touchdown passes (29). With what was arguably the best Baylor football team of all time, Russell could have taken the Bears all the way to the national championship. However, luck wasn’t in favor of the team as QBs Russell, No. 2 Jarrett Stidham and No. 3 Chris Johnson all went down with injuries in a span of four weeks.

The 2016 Baylor team have the odds stacked against them as they’ve lost four of five offensive linemen and five defensive linemen along with countless receivers, tight ends, defensive backs and a fan favorite long snapper. However, with both Russell and Stidham fully healthy along with freshman Zach Smith on campus since January, the quarterback situation at Baylor is bright.