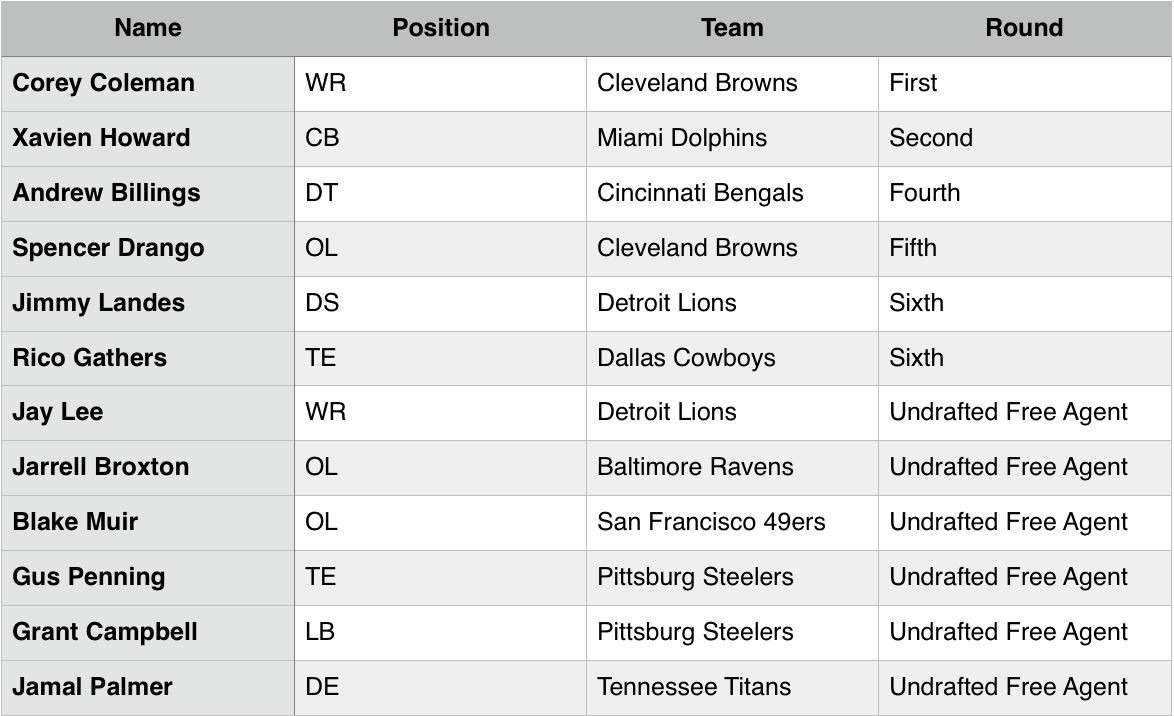 The 2016 NFL Draft ended yesterday and six Bears were drafted while six more signed with teams as free agents. At No. 15, Corey Coleman was the first wide receiver picked before standouts like Ole Miss’ Laquon Treadwell and Oklahoma’s Sterling Shepard. Coleman will be joining former Baylor star QB Robert Griffin III with the Cleveland Browns. Cornerback Xavien Howard was picked up surprisingly early in the second round at No. 38. After foregoing his senior season, Howard was doubted by most Baylor fans and sports journalists. Fortunately, he will be heading to Miami under new head coach Adam Gase. Fellow underclassman Andrew Billings was predicted to go in the first round but shockingly dropped down to the fourth. It’s still not clear why the powerful defensive tackle’s draft stock plummeted to No. 122, but Billings’ positive response to the situation shows his strong character and work ethic. He will shine with the Cincinnati Bengals. Former All-American left tackle Spencer Drango was picked up by the Cleveland Browns at No. 168. Drango joining former teammates Coleman and RGIII seems like a dream come true. I guess I’ll be rooting for the Cleveland Brown Bears… Deep snapper Jimmy Landes is the first ever Baylor snapper to make an appearance in the NFL Draft at No. 210. The former baseball player will look to battle it out for the Detroit Lions starting position. The biggest news of the night was arguably the Dallas Cowboys picking power forward-turned tight end Rico Gathers at No. 217. When Gathers announced his decision to enter the draft, most fans and spectators across the nation doubted his ability to turn heads. However, Dallas GM Jerry Jones has high hopes for the basketball player who hasn’t played a down since middle school. Here’s hoping that Gathers can walk the talk.

Baylor not only drafted six players but also had six others sign contracts as free agents. Wide receiver Jay Lee will hope to use his speed and height to earn a starting spot on the Detroit Lions roster. He will be joining fellow teammates Landes in Michigan in a few weeks. Offensive guard Jarrell Broxton was a standout lineman for the 2014 and 2015 Baylor team. He signed a contract with the Baltimore Ravens- a picture perfect situation as Broxton’s hometown is right across the state in Maryland. Blake Muir was another offensive guard who greatly contributed to the team after transferring from the University of Hawaiʻi. The Australia native will head to the San Francisco 49ers with the hope of rebuilding a team from the ashes. Gus Penning shined as the team’s starting tight end in 2015 and the Pittsburg Steelers took notice of his skills during Pro Day. He will be joined by linebacker Grant Campbell in Pennsylvania and they will meet up with former Baylor wide receiver Levi Norwood who signed a contract with the team this past year. Former All-Big 12 defensive end Jamal Palmer signed a deal with the Tennessee Titans and will prove his strength and agility when he heads to Nashville in a couple of weeks.

Congratulations to all of the Bears who are on their way to reaching their dreams! They are all incredible people and players who deserve all the success in the world.